FedUni is the fourth oldest tertiary education institution in Australia, having begun under predecessor institutions in 1870, during the Victorian gold rush. With the merger between the University of Ballarat and Monash University's Gippsland campus in 2013, the university changed its name to Federation University from 2014.[3][4][5] 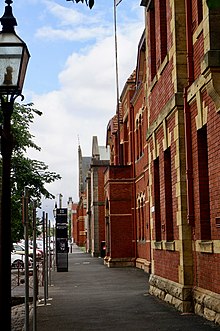 On 6 September 2013, the Victorian Parliament passed legislation to establish Federation University Australia,[7] The name change officially began in 2014. The then Vice-Chancellor justified the name change as an attempt to broaden the reach of the university nationally and internationally, and in fairness to the campuses outside Ballarat.[8] The name was also the preferred name within the university, compared to 'State University of Victoria', 'Eureka University', 'Robert Menzies University' or 'Vida Goldstein University'.

The former Ballarat Gaol, which was a maximum security prison that operated from 1862 until 1965, was located on the site of the university's School of Mines (SMB) campus, at the southern end of Lydiard Street. The area is known for being a well preserved Victorian era street.[9] While the prison was mostly demolished in the 1960s, the old prison walls, gate and guard towers, as well as the residences of the governor and warden, still exist. The Collaborative Research Centre in Australian History (CRCAH) is located in the governor's residence of the Old Ballarat Gaol. The CRCAH director's office was once the bedroom of Bella Guerin, who became the first woman to graduate from an Australian university in 1883.[10] The campus also includes the old School of Mines buildings.

Students can undertake undergraduate degrees across a wide range of study areas, which are: 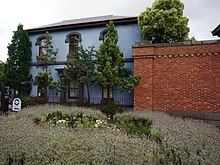 Researchers – academics and post-graduate students – undertake work within various centres, as well as within the disciplines. The research priority areas of the university are information forensics and security, transformative and preventative health, dynamic landscapes, history and heritage, and improving policy and practice in VET. The research centres are:

There are also research facilities at Ballarat Technology Park, the Gippsland Enterprise Centre and Nanya Station in rural NSW. 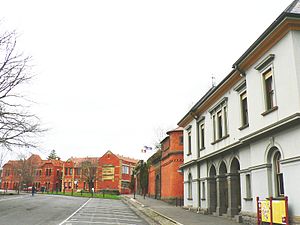 In 2017, 80% of undergraduate students study full-time and on campus, which is unique for a regional university, and 35% of students are international students.[18]

In addition to the following campuses, the university also had joint-degree programmes with international colleges, including PLK Vicwood KT Chong Sixth Form College in Hong Kong.

SMB campus is set among the heritage buildings of Lydiard Street Sth including the former School of Mines and Industry (left), former Supreme Court and former Ballarat Gaol (rear)

Located in Mount Helen, 10 km south of Ballarat. The university's largest campus, it has two residences, Peter Lalor Hall and Bella Guerin Hall. Its programs include the School of Education and Arts; School of Health Sciences; School of Science, Information Technology and Engineering; and the Business School.

The Gippsland Campus is located in the township of Churchill in the foothills of the Strzelecki Ranges. The campus is home to over 2,500 students and approximately 400 staff

The Berwick Campus is located in Berwick and is the newest of Federation University's campuses. It was transitioning itself from the Monash University, Berwick campus in 2017 and completed its transition in early 2018. The exact location of the building is 100 Clyde Road Berwick VIC 3806. The university has four buildings naming 901, 902, 903, and 930 as well as additional buildings for on-campus living.

The university has a technology park with the mission to facilitate the development of technology-based companies or companies that benefit from the technological resources of the university.[19] The following organisations operate in the park.

More than 1350 people are employed by tenants at the technology park and approximately half of those holding Federation University Australia qualifications. Recently IBM decided to expand its workforce with the construction of a new $10 million building on the park.[20]