Devonport is a city in northern Tasmania, Australia. It is situated at the mouth of the Mersey River. Devonport had an urban population of 23,046[1] at the 2016 Australian census. A larger urban area, including Latrobe has a population of 30,297[2] at June 2018, having grown at an average annual rate of 0.17% year-on-year over the preceding five years.[2]

During the 1850s the twin settlements of Formby and Torquay were established on opposite banks at the mouth of the Mersey River. Torquay on the eastern shore was the larger community with police, post, magistrate, at least three hotels, shipyards and stores. A river ferry service connected the two communities. Between 1870 and 1880 the shipping industry grew and work was undertaken to deepen the mouth of the river. When the mouth of the river could support a shipping industry the first regular steamer services commenced, operating directly between the Mersey and Melbourne.

In 1882 the Marine Board building was built and remains one of the oldest standing buildings in Devonport.

In 1889 the Bluff lighthouse was completed and the turn of the century saw the railway make a significant difference to the Formby community. It combined a railhead and port facilities in the one place. A wharf was created on the west bank, close to the railway and warehouses. The railway brought a building boom to Formby. In 1890 a public vote united Torquay and Formby, and the settlements became the town of Devonport.

The Victoria bridge was opened in 1902 which enabled a land transport link between Devonport and East Devonport.

Devonport was proclaimed a city by Prince Charles of Wales on 21 April 1981 in a ceremony conducted on the Devonport Oval.

The cross river ferry service was discontinued in 2014 after 160 years of continuous service when the vessel the "Torquay" was taken out of service.[4] It has since resumed operating.[5]

Facilities and the arts 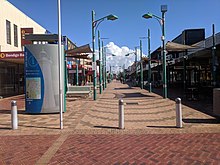 The Rooke Street Mall in the CBD of Devonport

The main CBD is on the west side of the Mersey River and includes a pedestrian mall, cinema, speciality stores, chain stores such as IGA and hotels. There are several local restaurants and cafes.

The Devonport Regional Gallery evolved from the inception of The Little Gallery, which was founded by Jean Thomas as a private enterprise in 1966. The Gallery presents an annual program of exhibitions, education and public programs including events and workshops. A broad range of selected local artisan works are displayed at the North West Regional Craft Centre and gift store in the CBD.

The Bass Strait Maritime Centre housed in the former Harbour Master's House has objects, models and photographs that tells the stories of Bass Strait and Devonport.

A volunteer run vintage railway and museum, the Don River Railway, is situated at Don, a suburb of Devonport.

The former Devonport Maternity Hospital was recently demolished and the land sold to a developer for building affordable housing.[7]

The Mersey Community Hospital at Latrobe serves the Devonport community for their health needs.

Kokoda Barracks is an army barracks in Devonport.

Annette Rockliff was elected mayor of the City of Devonport in 2018.[8] There are 9 aldermen that govern the Devonport City Council[9]

Devonport Airport is located at Pardoe Downs approximately 7 km to the east of the city of Devonport, about a 15 min drive by car. The airport is serviced by Bombardier Dash 8 turboprop aircraft, operated by QantasLink, with four daily services to Melbourne, Victoria.

There are several bus companies serving Devonport including Mersey Link, Redline Coaches and Phoenix Coaches. Metropolitan Devonport bus services are limited on Saturdays and there are no services on Sundays or Public holidays.

has exported cement products produced from Railton to Melbourne since 1926. Other exports via ships include tallow.

In early days coal was an export product.

A rail line still services the ports area of Devonport. Devonport once had a roundhouse and railway maintenance yards on the foreshore of the Mersey River. A park exists there today.

Devonport is the southern terminus for the Spirit of Tasmania ferries – Spirit I and II travel the 11 hours to Melbourne.[11]

A TasTAFE campus, an adult training institution, is situated in Valley Road.

Devonport has an warm-summer mediterranean climate (Köppen climate classification Csb) , bordering on an oceanic climate (Köppen climate classification Cfb), with mild to warm summers, cool and moist winters and high humidity (about 70%) all year round. Most days from January to March are pleasantly warm, averaging 19 to 24 °C (66 to 75 °F) with frequent sunshine. The warmest and driest days can occasionally reach up to 28 °C (82 °F). Unlike the south and east coasts of Tasmania, humid northerly winds prevent heatwaves and temperatures rarely if ever reach above 30 °C (86 °F). Winters are cool and cloudy with frequent light rain; July and August are the wettest months of the year. Due to almost constant cloud cover and coastal influence, winter temperatures rarely drop below 0 °C (32 °F) or rise above 15 °C (59 °F). September to December usually features mild and windy weather with frequent showers, and occasional warm, sunny breaks.

The Devonport Football Club, Magpies, is an Australian rules football team competing in the North West Football League with their home base being the Devonport Oval. 2020 NWFL Grand finalist.

The East Devonport Football Club an Australian Rules Football Club, the Swans play in the North West Football League alongside teams like Ulverstone and Penguin, to name but two.

Devon Netball is located just outside Devonport in Spreyton, and is the main centre for netball within the Devonport area. The club participates within state wide netball events and tournaments, with some of their best players playing within the State League roster.

Devonport City Football Club an Association Football club that competes in the statewide National Premier Leagues Tasmania, as well as fielding a reserve team in the Northern Championship.

The Devonport Athletic Club,[14] a professional athletic club, hosts a leg of the Tasmanian Cycling Christmas Carnival Series[15] each year in December attended by local and international cyclists, other sports at the carnivals include athletics and woodchopping. Woodchopping events are also held at the Devonport Agricultural & Pastoral Society Spring Show[16] in November.

Devonport Warriors are a Devonport-based basketball team that compete in the North West Basketball Union.

The Devonport Golf Club is located at Woodrising Avenue, Tasmania and has been home to the Tasmanian Open and Tasmanian Seniors Open.

The Devonport Cup a horse race is held annually in January at the Spreyton racecourse. There is a gazetted local holiday for the event.

Power Boat racing has been a feature at the Devonport Annual Regatta held each March long weekend. The Regatta commenced in 1958.

The Splash Devonport Aquatic and Leisure Centre has a world class gym and indoor swimming pool and is based within the Don Reserve.

The Devonport triathlon held annually in February is the continental championship for Oceania.

Notable players that went on the play in the VFL/AFL:

The city of Devonport has a formal sister city agreement with Minamata City in Japan. This was ratified in 1996. Both cities share a similar setting and area.