Colac /ˈkoʊlæk/[2] is a small city[3] in the Western District of Victoria, Australia, approximately 150 kilometres south-west of Melbourne on the southern shore of Lake Colac and the surrounding volcanic plains, approximately 40 kilometres (25 mi) inland from Bass Strait. Colac is the largest city and administrative centre of the Colac Otway Shire. At June 2018, Colac had a population of 12,547.[1]

A commercial centre for a major agricultural district, it was named after nearby Lake Colac and was proclaimed a city in 1960.[4]

For thousands of years clans of the Gulidjan people occupied the region of Colac, living a semi-nomadic life.[5]

The Post Office opened on 1 July 1848 as Lake Colac and was renamed Colac in 1854.[6] Colac Botanic Gardens in Queen Street located on the shores of Lake Colac, were established in 1868.

In 1854 town founder Hugh Murray employed a couple of shepherds named Thomas Brookhouse and Patrick Geary. Brookhouse who was looking for missing sheep disappeared without a trace. Patrick Geary and his wife soon left the district. Fifteen years later a boy out rabbiting found the skeletal remains of Thomas Brookhouse under a pile of rocks near Lake Corangamite. Brookhouse had his head smashed in. It took Police two years to track Patrick Geary and charge him with Brookhouse's murder. A friend of Geary told the court that Geary had killed Brookhouse with an axe to stop him from informing Murray of Geary's sheep stealing activities.[7] Geary was hanged in Melbourne in 1871.

Role in World War I

A plaque on the southern side of the Memorial Square commemorates two historic speeches given on consecutive nights in Colac, beginning on 31 July 1914 with the then Federal opposition leader, Andrew Fisher, and followed the next night by the Prime Minister Joseph Cook. The two speeches declared Australia's commitment to follow Britain into World War I, with Fisher declaring "Should honor demand the mother country taking part in hostilities, Australians would stand beside her to the last man and shilling." and Cook's famous reiteration that "If the old country is at war, so are we." Fisher became Prime Minister for the third time on 5 September. 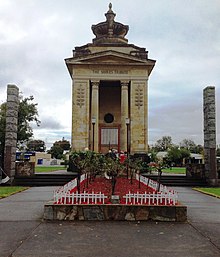 The War Memorial stands in the centre of Memorial Square.[8]

Colac contains a number of heritage listed sites,[9] including:

The plains around Colac are the third largest volcanic plain in the world.[12] Australia's largest permanent salt lake and Victoria's largest natural lake, Lake Corangamite, is nearby and Red Rock Reserve is nearby too.

Lake Colac's water level can drop over summer dry periods to the point that it actually dried up for the first time in recorded history in 2009, but is always replenished after drought and is used for fishing, boating and water skiing.

The Princes Highway (part of Australia's circumnavigational Highway 1) runs through the city and forms its main street, Murray Street. The highway runs west toward Camperdown and east to Geelong and beyond to Melbourne. Several secondary sealed roads including the C161, C155 and C154 run south toward Apollo Bay and the coastal tourism areas of the Otway Ranges Great Ocean Road, The Twelve Apostles and the Shipwreck Coast. The Colac-Ballarat Road runs north connecting Colac to Ballarat via Cressy.

The railway through the town was opened in 1877,[14] and extended from 1883 as part of the line to the south west of the state.

A narrow gauge branch line also originated from the town, the branch line to Beech Forest opened in 1902 and was extended to Crowes in 1911, finally closing in 1962. The route of the abandoned railway has been developed as the Old Beechy Rail Trail.

The local railway station is served by V/Line passenger services on the Warrnambool line. The train stops at Camperdown and Terang.

Colac was the home of the annual "Cliff Young Australian 6-day race". The event, which was originally orchestrated by Stuart Walker, occurred for over 20 years until 2006 and is a running/walking event. It was held on the Memorial Square which is right in the heart of Colac and attracted entries from all over the world.[15]

Also held at the Memorial Square is the annual Colac KANA festival taking place on the third Saturday of March. Many market stalls, children's entertainment and a song and dance stage can be found at the festival. The most popular feature of the festival is its parade through the streets of Colac's CBD. The parade showcases local primary schools and their students as well as local clubs, emergency service organisations and businesses.[16]

On the last week-end of October, first weekend in November the Colac Otway Arts Trail takes place. Featuring artists, studios and galleries in the Colac Otway Shire the trail also feature the 'Art Walk on Murray' where local artists display their work in the windows of the shops along the Murray Street precinct.[17]

With a wealth of natural resources, such as agriculture and timber, Colac has a strong manufacturing background, with major local employers including Bulla Dairy Foods and AKD Softwoods.

While historically the region supported numerous successful brickworks, nowadays the major primary industries are agriculture such as the dairying, beef, lamb and finewool merino industries.

Colac is the sister city of Walker, Michigan, USA

Most digital terrestrial television services are received via UHF from Ballarat Lookout Hill. In addition to the Ballarat service, a local repeater on nearby Warrion Hill provides an alternative source of television reception. As of August 2016, Television channels available include Southern Cross Nine, 9HD, 9Gem, 9Go!, 9Life and Yesshop.[22] These stations are now broadcast by Southern Cross Austereo after affiliate changes occurred in July 2016.[23] This change included One, TVSN, Eleven and Aspire which are owned by Network Ten but now broadcast by WIN Television who also transmit WIN HD and GOLD. The city also receives Prime7, 7TWO, 7mate, ishop tv and Racing.com (sub-licensees of the Seven Network) which were unaffected by July's change.

In addition to commercial television services, Colac receives Government ABC Television which includes ABC, ABC HD, ABC2 (Daily from 7pm to 5am), ABC Kids (Daily from 5am to 7pm), ABC Me (Daily from 6am to 11pm approx.) and ABC News 24 as well as the SBS's owned channels of SBS One, SBS HD, SBS Two, National Indigenous Television and Food Network. Analog Television transmissions ceased on Thursday 5 May 2011 as part of the Federal Government's nationwide plan for Digital terrestrial television in Australia, which involves switching over all television broadcast services from analog systems to digital DVB-T systems.

Colac is home to a number of teams in the Colac & District Football and Netball League combining both Australian Rules football clubs and netball clubs from around the district.

Colac has a swimming club which trains swimmers and has athletes competing at Region, State and national competitions.

Colac has a baseball club, the Colac Braves, a team which competes in the Geelong Baseball Association winter competition and the Pan-Pacific Masters Games on the Gold Coast. The Colac Braves also cater for players aged 5 to 15. The Braves have claimed recent premiership success in the Geelong Baseball Association with wins in 2008, 2009 and 2010.[27]

Colac also has a basketball summer and winter competition held in bluewater's Stadium. the clubs are saints, hawks, kookas and more.

People born or raised in Colac