The City of Lake Macquarie is a local government area in the Hunter Region of New South Wales, Australia and was proclaimed a city from 7 September 1984. The area is situated adjacent to the city of Newcastle and is part of the Greater Newcastle Area.[12] The city is approximately 150 km (93 mi) north of Sydney. One of its major tourist attractions is its lake, also named Lake Macquarie.

The mayor of the City of Lake Macquarie Council is Councillor Kay Fraser, a member of the Labor Party.[4]

The Royal Australian Navy ship HMAS Tobruk was granted the Right of Freedom of Entry to the City of Lake Macquarie on 9 August 1991.[13]

The Australian Bureau of Statistics classifies various towns and suburbs in the LGA as being part of the Newcastle Statistical District. The City of Lake Macquarie has its own independent local government (Lake Macquarie City Council). The largest commercial centre in the region is Charlestown.

The area is a set of contiguous towns that surround a coastal saltwater lake. These towns merge with the suburbs of Newcastle to the north. Some suburbs, such as Adamstown Heights are partly in the City of Newcastle and partly within the City of Lake Macquarie. There are 92 identified settlements ranging from small rural style communities through to larger and higher density areas such as Toronto, Warners Bay, Belmont, Charlestown and Morisset.

At the 2011 census, there were 189,006 people in the Lake Macquarie local government area, of these 48.8% were male and 51.2% were female. Aboriginal and Torres Strait Islander people made up 3.0% of the population, which was higher than the national and state averages. The median age of people in the City of Lake Macquarie was 41 years, which was significantly higher than the national median of 37 years. Children aged 0 – 14 years made up 18.6% of the population and people aged 65 years and over made up 18.4% of the population. Of people in the area aged 15 years and over, 51.0% were married and 12.2% were either divorced or separated.[16] 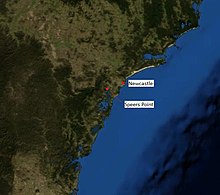 Speers Point, which is shown in relation to Newcastle, is the seat of government for the city of Lake Macquarie.

Lake Macquarie City Council is composed of thirteen Councillors, including the mayor, for a fixed four-year term of office. The mayor is directly elected while the twelve other Councillors are elected proportionally as three separate wards, each electing four Councillors. The most recent election was held on the 10th of September 2016, and the makeup of the Council, including the mayor, is as follows:[4]

The current Council, elected in 2016, in order of election by ward, is:

Lake Macquarie has a number of cultural and artistic locations:[23]

The City of Lake Macquarie has sister city relations with the following cities:[24]