This article is about the V/Line service. For the railway itself, see Serviceton railway line.

The Ballarat V/Line rail service is a regional passenger rail service operated by V/Line in Victoria, Australia. It serves passengers between state capital Melbourne and the regional city of Ballarat. Beyond Ballarat it changes name to the Ararat railway line and the Maryborough railway line.

The Ballarat service is the second busiest service in Victoria (behind Geelong) carrying 3.17 million passengers in the 12 months ended 30 June 2014.[7]

Ardeer station, with a train stopped at the platform 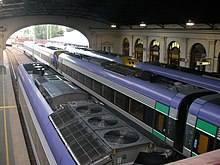 V/Line once operated services to Horsham and Dimboola. Several rail stations such as Gordon and Warrenheip were closed in October 1981 as part of the New Deal timetable. All services beyond Ballarat were withdrawn on 27 May 1994,[8] and in 1995 the One Nation Program regauged the line beyond Ararat. The broad-gauge line between Ballarat and Ararat was closed to all traffic, with the broad-gauge passenger service from Ballarat to Ararat not reinstated until 2004 under the Linking Victoria program.

In November 2004, Premier of Victoria Steve Bracks announced that the line would be renamed the Eureka Line to mark the 150th anniversary of the Eureka uprising. Due to take effect from late 2005 at the same time as the renaming of Spencer Street station to Southern Cross.[9] The renaming was criticised by groups such as the Public Transport Users Association,[10] and was never carried out.

In December 2008, as part of the Victorian Transport Plan, the State Government announced passenger rail services to Maryborough would resume with services commencing on 25 July 2010.[12][13]

Construction of the Caroline Springs station, between Deer Park and Rockbank stations, commenced in August 2015 and the station opened on 28 January 2017.[15]

Ararat station - the end of the line

V/Line operates an average half-hourly passenger services along the line. Half terminate at Bacchus Marsh with every second one continuing through to Wendouree (four of these also extending to Ararat station and two to Maryborough.[19]

Services are operated primarily by V/Line VLocity DMUs, while peak-hour trains to Bacchus Marsh are operated by Sprinter DMUs and H type carriages hauled by N and A locomotives.

To alleviate capacity constraints on the single track section, one Ballarat to Melbourne service in the evening peak is provided by a road coach.[19]

V/Line operates passenger trains on the Ararat line to and from Southern Cross station in Melbourne, as well as three road coach services connecting with buses at Ballarat.[20] Roughly half the number of services run towards Maryborough.

Beyond Ballarat the line is classified by V/Line as an Intercity service, so seat reservations are no longer required. Many services run as limited expresses between Ballarat and Melbourne.

On 16 July 2014, V/Line trains between Melbourne and Ararat ceased stopping at as part of the Regional Rail Link project.

In November 2017, the state government announced Cobblebank station would be built between Rockbank and Melton, with a scheduled 2 December 2019 completion date.[21][22][23][24]

The majority of the line is single track, with the exception of:

Bold stations are termini, where some train services terminate; italic stations are staffed, at least part-time: