Woodville was one of the first areas to be settled by European migrants in the mid-19th century, many establishing dairy farms in the vicinity. By 1853 Woodville consisted of 24 houses, a forge and a wheelwright’s shop. The Woodville Post Office opened around March 1856.[2] It has many fine examples of colonial and federation architecture and was considered to be a genteel area. Many European migrants settled in Woodville and the surrounds after World War II. It was a busy local centre in the 1950s and 1960s when General Motors Holden had a car manufacturing plant in the nearby suburb of Cheltenham and because of its proximity to the Queen Elizabeth Hospital in Woodville South. Woodville Road was the hub of local activity with numerous commercial businesses. During the 1980s and 1990s, Woodville and its surrounds became home to many Vietnamese refugees from the Vietnam War. Decline set in in the 1980s upon the closure of the Cheltenham plant of General Motors Holden. Woodville became a depressed suburb, particularly during the 1990s. Since then, Woodville is undergoing a revival and many are now seeking residence in Woodville because of its architecture. Woodville Road, although not as a lively as it once was, is starting to develop a personality again. Woodville's inhabitants are still multiethnic.

In 2005, the Woodville Warriors won the ABL (Australian Basketball League) championship, which is South Australia's state league. This was their first championship since 2000. 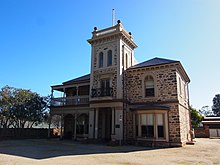 The Brocas museum, formerly in Woodville, now at 111 Woodville Road, St Clair, was built in 1840 as a residence for John Newman.

Woodville has two items listed as State Heritage Places. St Margaret's Anglican Church, located at 789-791 Port Road, was dedicated in 1856 and is constructed of picked limestone. The structure is dominated by a rectangular tower and the church contains stained glass windows which honour local pioneers.[4] A lych-gate, which is also heritage listed, was built in 1919 as a memorial to Woodville men who served in World War One. The church is significant as one of several 'village' churches built within the Adelaide districts between 1836 and 1860, as well as its representation of the development of the early Anglican Church within South Australia.[5] The Brocas Museum, located on Woodville Road, is the former residence of John Newman, a shipping agent, and Henry Fletcher. The heritage significance of the Brocas includes its representation of the scale and style of residence built by the Adelaide gentry in what was at the time a semi-rural district.[6]

Woodville contained a number of other significant buildings which have since been demolished. These included St Clair, the homestead by John Bristow Hughes in 1854. Under Hughes' ownership, St Clair became one of the largest mansions in Adelaide at that time.[8] Hughes added an underground kitchen, a second storey, and the entire ground floor was converted into a ballroom. The home was demolished and replaced by the St Clair Recreation Centre, which is itself local heritage listed on account of being South Australia's first major youth centre and indoor sports stadium and its modernist architecture.

St Margaret's Anglican Church on the corner of Port Road and Woodville Road represents one of the finest examples of early village churches within the Adelaide districts, dedicated in 1856. The Ukrainian Catholic Church ‘Saints Volodymyr and Olha Church’, is located on Woodville Road and was constructed in 1963 by the local Ukrainian community.[8] The building is listed as a Local Heritage Place. The Woodville Christadelphian Hall is located on Aberfeldy Avenue.