WOMADelaide is an annual four-day festival of Music, Arts and Dance, which was first held in 1992 in Botanic Park, Adelaide, South Australia. Part of the WOMAD festivals organisation, WOMADelaide aims to excite, to create, to inform and to highlight awareness of the worth and potential of a multicultural society.[1] The festival encourages people to experience the music of cultures other than their own as a way of developing global understanding,[2] and aims to entertain all age groups and people from all backgrounds.[3] WOMADelaide has won the Helpmann Award for "Best Contemporary Music Festival" in 2008[4] and 2016,[5] the Australian Event Awards "Best Cultural, Arts or Music Event" in 2015,[6] and the Fowlers Live / SA Music Awards "Best Live Music Event" for 5 years in a row, 2012 - 2016.[7]

WOMADelaide was first run in 1992 as part of the Adelaide Festival of Arts. From 1993 it ran every two years (in odd-numbered years) so as to not conflict with subsequent editions of the Festival. From 1996 the management and production of WOMADelaide was taken on by the Adelaide-based company, Arts Projects Australia.[8]

In 2003, WOMADelaide became an annual festival following a decision made by the Rann government to financially support the event.[9] That year, WOMADelaide Foundation Limited was also established as a not-for-profit organisation.[10] The Foundation presented subsequent festivals and special projects for remote Indigenous arts communities.[3]

In 2010, in celebration of the 50th Anniversary of the Adelaide Festival of Arts, WOMADelaide extended to four days. Due to overwhelming popularity, the festival has now permanently taken on the fourth day.[11] That year, WOMADelaide was produced and presented by the WOMADelaide Foundation, was managed by Arts Projects Australia and WOMAD Ltd, and was presented in association with the Government of South Australia.[12]

In 2017, WOMADelaide became a smoke-free event, with provision for smoking in three designated areas.[13]

WOMADelaide is held in Botanic Park, which is situated north-east of central Adelaide, between the Adelaide Zoo and Adelaide Botanic Garden. The 34-hectare park is fenced off for the duration of the festival, providing an enormous amount of space. The main stages are set up around a backstage compound with Stage 1 in the middle and Stages 2 and 3 on either side, all facing out from the backstage area. There are an additional four smaller stages (Zoo Stage, Moreton Bay Stage and two in Speakers Corner). There are also visual arts exhibitions, a KidZone, a Global Village market area with over 100 food, crafts and display stalls, as well as several bars. All front-of-stage areas, the KidZone and the food and drink area are designated smoke-free. WOMADelaide currently leads the way in Waste Minimisation working closely with Zero Waste SA. After the 2005 festival some six tonnes of compost from WOMADelaide waste were returned to the Botanic Gardens in an effort to preserve the delicate ecosystem in which the event is located. In 2007, WOMADelaide joined forces with Greening Australia, Australia’s largest environmental organisation, to remove the global warming impact of the event. The carbon generated through artists’ travel, and the festival site lighting and power was offset through the re-vegetation of native bushland in SA, which also helped to restore native habitat for rare and endangered species and reduce the effects of salinity. 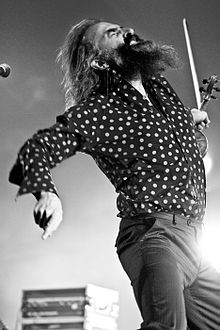 Warren Ellis of the Dirty Three performing at WOMADelaide 2012 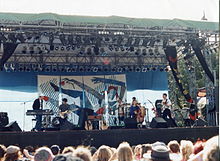 Not Drowning, Waving performing at WOMADelaide 1992 (the first)

WOMADelaide draws its performing artists from all over the world. A specific emphasis is placed on traditional music and performances of various cultures although some more contemporary, popular acts are included. The festival runs from 6pm to 1am on Friday, from 12noon until 1am on Saturday and from 12noon-12midnight on Sunday. In 2010, due to substantial popularity WOMADelaide was extended to include Monday from 12noon - 12midnight, making the festival four days in length. Artists also lead workshops demonstrating and/or discussing aspects of their performances on smaller stages. There are also artists who do 'roving' performances through the park and installation pieces, such as who set up large fire installations at the 2005 festival.

More than 300 groups from 80 countries have appeared at the festival since 1992, including: