West Croydon is a suburb in the north-west of Adelaide, South Australia.

West Croydon has a population of 4,141 as of the ABS 2016 census[1], and is located 5 km west of the Central Business District of Adelaide. The population has changed greatly over the past 15 years as older residents move away, and younger residents move in. The main industry is Glass Manufacturing with ACI being one of the largest plants of its type in the Southern Hemisphere.

Croydon High School closed at the end of 2006 due to falling enrolments. The site is currently occupied by the School of Languages and the Adelaide Secondary School of English. The Islamic College of South Australia is also located in West Croydon. 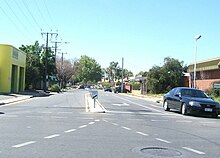 The Suburb is within the Federal seat of Adelaide and the City of Charles Sturt.[2] Until the early 1920s the suburb was a farming area with infill occurring until the 1970s.

West Croydon transformed from mostly farmland into a suburb in 1925 when the Shillabeer family sold a large portion of East View Farm (established in 1840). In 1944 the Shillabeer farm homestead was purchased by the state government and became the Croydon Technical High School, which later changed name to Croydon High School. Adelaide Secondary School of English moved to the site in 1998.[3]

The first Allenby Gardens Post Office was renamed West Croydon on 1 March 1945 and closed in 1971.[4]

West Croydon is part of Hindmarsh Ward in the City of Charles Sturt local government area, being represented by Labor councillors Paul Alexandrides and Alice Campbell.[6]

West Croydon lies in the state electoral district of Croydon[7] and the federal electoral division of Adelaide.[8] The suburb is represented in the South Australian House of Assembly by leader of South Australian opposition, Labor party member Peter Malinauskas and federally by Steve Georganas.[8]

Within West Croydon are the parks of MJ McInerney Reserve, Carnarvon Reserve and Croydon Avenue Reserve.[5]