Virginia is a town on the rural outskirts of Adelaide, the capital city of South Australia. Port Wakefield Road, the main highway taking traffic to the north of Adelaide, passes through the area and used to pass straight through Virginia. Market gardening is the main activity there. 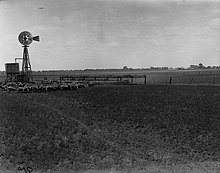 Sheep near the windmill of a farm at Virginia, ca. 1924

Virginia is home to the Adelaide International Raceway, a 2.41-kilometre-long (1.50 mi) road racing circuit which opened in 1972 and incorporates an internationally recognised drag racing strip and a ​1⁄2-mile (805 metres (880 yd)) slightly banked paved oval speedway as part of the main circuit. It is also home to the 430 metres (470 yd) Speedway City, Adelaide's main Dirt track racing car speedway which is located adjacent to the Raceway and was opened on 2 November 1979. Both AIR and Speedway City are located approximately 3 km south of the Virginia township.

From 1969 to 1974, Virginia was home to the Thunderbird Raceway, a dirt track speedway located at the towns Recreation Reserve (now the local Australian rules football and cricket oval). Originally known as the Virginia Fairgrounds Speedway when it opened in 1969 (work had begun in 1968), the name was changed to Thunderbird Raceway in 1971 under the promotion of Doug Sunstrom who had taken over from the original promoters, the Bevan family. Sunstrom promoted the speedway as a ​1⁄2-mile track, though it was closer to ​1⁄3 mile (500 metres (550 yd)) in length. Racing at Thunderbird took place during the winter months to complement Adelaide's then major summer speedway Rowley Park.[3]