Vietnamese Australians (Vietnamese: Người Úc gốc Việt) are Australians of Vietnamese ancestry, or people who migrated to Australia from Vietnam. Communities of overseas Vietnamese are referred to as Việt Kiều or người Việt hải ngoại.

Up until 1975 there were fewer than 2,000 Vietnam-born people in Australia.[3] Following the takeover of South Vietnam by the North Vietnamese communist government in April 1975, Australia, being a signatory to the Convention Relating to the Status of Refugees, agreed to resettle its share of Vietnam-born refugees under a refugee resettlement plan between 1975 and 1985. After the initial intake of refugees in the late 1970s, there was a second immigration peak in 1983–84, most likely a result of the 1982 agreement between the Australian and Vietnamese governments (the Orderly Departure Program) which allowed relatives of Vietnamese Australians to leave Vietnam and migrate to Australia. A third immigration peak in the late 1980s seems to have been mainly due to Australia's family reunion scheme.[4] Over 90,000 refugees were processed, and entered Australia during this time.[citation needed] 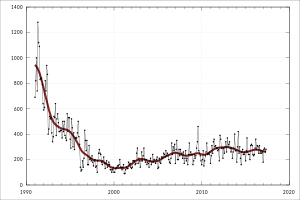 Past history of dual socioeconomics

Vietnamese Australians used to vary in income and social class levels. Australian born Vietnamese Australians are highly represented in Australian universities and many professions (particularly as information technology workers, optometrists, engineers, doctors and pharmacists), whilst in the past, some members in the community were subjected to poverty and crime.[5]

Vietnamese Australians have an exceptionally low rate of return migration to Vietnam. In December 2001, the Department of Foreign Affairs and Trade estimated that there were 3,950 Australian citizens resident in Vietnam. It is not clear what proportion of this number are returned emigrants with Australian citizenship or their Vietnamese Australian children, and what number is simply other Australians in Vietnam for business or other reasons. The greater proportion (3,000) were recorded in the south of the country.

People with Vietnamese ancestry as a percentage of the population in Sydney divided geographically by postal area, as of the 2011 census 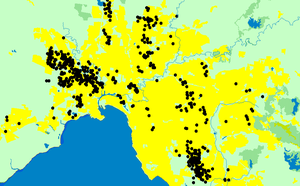 About 0.8% of the Australian resident population was born in Vietnam; in terms of birthplace, Vietnam has been the fifth-largest source of immigration to Australia, behind the United Kingdom, New Zealand, China, and India.[1] Only The United States and France have larger Viet Kieu communities. According to results of the 2016 Census, 219,355 Australian residents declared that they were born in Vietnam[1]

Over three-quarters of people born in Vietnam live in New South Wales (63,786, or 39.9%) and Victoria (58,878, or 36.8%).[7] In Melbourne the suburbs of Richmond, Footscray, Springvale, Sunshine and St Albans have a significant proportion of Vietnamese-Australians, while in Sydney they are concentrated in Cabramatta, Cabramatta West, Canley Vale, Canley Heights, Bankstown, St John's Park and Fairfield. Other places of significant Vietnamese presence include Brisbane, where many have settled in suburbs like Darra and Inala, Adelaide, Canberra and Perth. 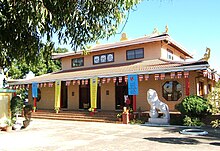 According to census data released by the Australian Bureau of Statistics in 2004, Vietnamese Australians are, by religion, 30.3 per cent Catholic, 0.4 per cent Anglican, 3.1 Other Christian, 55.2 per cent Other Religions, mainly Buddhist, Taoism, and Ancestor Worship and 11.0 per cent No Religion.

In 2001, the Vietnamese language was spoken at home by 174,236 people in Australia. Vietnamese was the sixth most widely spoken language in the country after English, Chinese, Italian, Greek and Arabic.

During October 2003, government owned SBS TV began airing a Vietnamese news program called Thoi Su ('News'). The stated purpose was to provide a news service to cater for Australia's Vietnamese population. This was received poorly by the significant portion of the Vietnamese community as many had previously fled after the fall of South Vietnam and thus harbour resentment to the communist government and its institutions, including the state-controlled media. Thoi Su was regarded as a mouthpiece for the ruling Vietnamese Communist Party, and uncritically endorsed government policy and practices using strong language while failing to report issues objectively including political arrests or religious oppression in Vietnam. A large protest was convened outside SBS's offices.[9] SBS decided to drop Thoi Su (which was being provided at no cost to SBS through a satellite connection). SBS subsequently began broadcasting disclaimers before each foreign news program stating it does not endorse their contents.