The university was founded in its current form in 1991 with the merger of the South Australian Institute of Technology (SAIT, established in 1889 as the South Australian School of Mines and Industries) and the South Australian College of Advanced Education (SACAE, established 1856).[3] The legislation to establish and name the new University of South Australia was introduced by the Hon Mike Rann MP, Minister of Employment and Further Education.[4] Under the University's Act, its original mission was "to preserve, extend and disseminate knowledge through teaching, research, scholarship and consultancy, and to provide educational programs that will enhance the diverse cultural life of the wider community".[5]

UniSA is among the world's top universities, ranked in the World's Top 50 Under 50 by both the Quacarelli Symonds (QS) World University Ranking (#29) and Times Higher Education (THE) (#25). It has two Adelaide city centre campuses, two Adelaide metropolitan campuses, and two South Australian regional campuses.

UniSA was formed in 1991 by the merger of the South Australian Institute of Technology with three South Australian College of Advanced Education campuses.[6] To the former SACAE campuses of Magill, Salisbury, and Underdale, SAIT added its three campuses at City East, The Levels (now called Mawson Lakes) and Whyalla. The two other SACAE campuses, City (adjacent to University of Adelaide), and Sturt (in Bedford Park, adjacent to Flinders University), were later merged into their nearby universities.[7]

The South Australian School of Arts can trace its history back to 1856[8] and the work of Charles Hill and H. P. Gill, and connected to the South Australian School of Design. As such, it can claim to be one of the oldest art schools in Australia, and the oldest public art school.[9] The school, now within UniSA's Division of Education, Arts and Social Sciences, is also known for providing a visual arts scholarship, the Ann & Gordon Samstag Scholarship.[10]

The CAE themselves were formed from various teachers' colleges in 1973.[6]

In 1979 Hartley CAE was formed from the merger of Murray Park CAE and Kingston CAE.

North Terrace institutions in 1926. School of Mines building is at far right.

The South Australian Institute of Technology traced its origins back to 1889 when the South Australian School of Mines and Industries established on the corner of North Terrace and Frome Road between the University of Adelaide and the Royal Adelaide Hospital.[11] The building, towards which Sir George Brookman was a significant contributor,[13] was from 1918 to 1960 the home of Adelaide Technical High School. In 1960 it became the South Australian Institute of Technology (SAIT) and Adelaide Technical High School moved to Glenunga to become Glenunga High. The SAIT was made up of three campuses, all of which remain a part of the University of South Australia.[6][11] In 1965 SAIT was designated a college of advanced education resulting in a broadening in the range of courses offered, particularly at the professional level.[11] Under a government reform to education in 1991 it was given the option of merging with the newly formed TAFE SA or the SACAE to form the University of South Australia. SAIT was an educational institution with 3 campuses in suburban Adelaide, and had a broad range of topics making it a clear fit with neither institution, though SACAE was chosen in the end.

Shortly after the merger, Salisbury campus was vacated in 1996, given its proximity of the nearby Levels campus, but its sale was held up for many years by litigation. In 1997, a new campus was opened at City West with schools from Underdale being relocated there. In 2005, the campus at Underdale was closed as part of the Blueprint 2005 project, and its remaining programs were moved to other campuses.

In 2013, the university released the 2013–2018 Strategic Plan named "Crossing The Horizon", shaping the future actions of the university nationally and internationally.[14] As part of the plan, the university committed to differentiate itself as Australia's University of Enterprise and to focus its activities on end-user needs. In 2014 the first building in a major new infrastructure plan to support those goals was opened. Named in recognition of the great Australian artist and UniSA alumnus, the Jeffrey Smart Building houses the UniSA Library and a host of student services. In 2018 two new buildings were opened; the new Great Hall, named Pridham Hall after a generous benefaction from a UniSA alumnus Andrew Pridham, and the University of South Australia Cancer Research Institute which houses the Centre for Cancer Biology (an alliance between UniSA and SA Health), the research-rich School of Pharmacy and Medical Sciences, UniSA's technology-based business incubation hub, the Innovation and Collaboration Centre and a new and unique future-focused public museum, MOD.

In June 2018, the university, along with University of Adelaide, launched official talks of a possible merger. The proposition was endorsed by Steven Marshall and Simon Birmingham,[15] but the merger was called off in October 2018.[16]

There are two campuses in the Adelaide city centre (both on North Terrace), two metropolitan campuses (at Mawson Lakes, formerly The Levels, and Magill), and two campuses in regional South Australia, (Whyalla and Mount Gambier). The University of South Australia also delivers its offshore degree programs in collaboration with private institutions in Hong Kong Baptist University and other higher education institutions throughout Asia.

Located on the corner of North Terrace and Frome Road, adjacent to the University of Adelaide, on the site of the former South Australian Institute of Technology, and before that, the School of Mines. The campus has undergone several building upgrades and expansions in recent years. The Basil Hetzel Building was opened in 2005 and includes 2,000 square metres of multipurpose biomechanical, pharmaceutical and microbiological laboratory space.[17] There was a major reconstruction to the historic School of Mines building in 2008–09[18] to include a new outdoor plaza, a new exercise physiology clinic, outdoor walkways, student lounges and other upgrades.

New building was also undertaken as part of a $167 million six-year asset plan known as Blueprint 2005, including the $35 million Hawke building, named in honour of former Prime Minister of Australia Bob Hawke and opened in 2007.[19] The Hawke Building houses the second largest public art gallery in the state of South Australia, the Anne and Gordon Samstag Museum of Art. It also includes the Kerry Packer Civic Gallery, (purpose-built for exhibitions relating to culture, history and social debate), the Allan Scott Auditorium, the Hawke Prime Ministerial Library, and Australia's only architecture museum.

The Blueprint project included the construction of six major buildings, extensions and upgrades across UniSA's six campuses and featured the Dorrit Black and Kaurna buildings completed in 2005 at City West, the South Australian School of Art, and the Louis Laybourne Smith School of Architecture and Design.[20]

In 2014 the University opened a new learning centre, the Jeffrey Smart Building, on the City West campus. Also on the City West campus are the new Pridham Hall featuring a sports complex, swimming pool and facilities for graduations, exams, corporate and cultural events which opened in 2018 and the new UniSA Cancer Research Institute, part of the biomedical and health precinct being developed on North Terrace. The Building, also opened in 2018, houses the university' Museum of Discovery (MOD>) 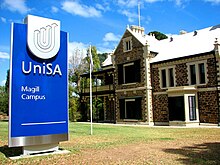 Magill Campus is located on St. Bernard's Road at Magill. It currently focuses on a range of education, humanities and social science disciplines, including psychology, social work, communication and media, public relations, journalism, and the study of creative industries.[21] As home to the largest cohort of teaching students in the State, the purpose-built SamsungSMARTSchool at UniSA, located at the Magill campus, is a key initiative in the development of UniSA's teacher education.

Mawson Lakes (formerly The Levels) currently houses computing and information technology, engineering, science, civil aviation, applied science, sports science, e-commerce and environmental studies programs. The campus also houses many research institutes and centres, including the (FII) which conducts industry-connected research and innovation in engineering and the physical sciences. The campus also houses a number of industry collaborations within the space and defence industries.[22] 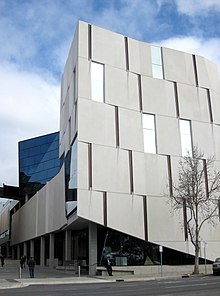 Each Academic Unit is focused on the quality of its teaching, research and the student experience, ensuring that UniSA students are equipped to meet the future needs of industry and society.

UniSA Business prepares students for global careers, creating leaders for change whose skills and knowledge shape business, industry and policy. Its research programs are inspired by the contemporary challenges facing Australia and its region, and it shares its expertise in modern business practice with partners locally and worldwide.

UniSA Creative focuses on developing creative professionals equipped with the skills and knowledge to influence the cultural landscape and to meet future industry demands. Its research explores the complexities of the world with unique cross-disciplinary collaborations that produce inspired, human-centred solutions.

UniSA Education Futures develops education professionals who will play a crucial role in the learning and development of children, young people and adults. Its research contributes to innovation in education and preparation for learning, supporting and informing new approaches to practice in the ever-evolving education sector.

UniSA Justice & Society develops new knowledge and multi-disciplinary solutions to some of society’s most pressing issues. The unit offers a wide range of programs and conducts world-class research in the fields of law, psychology, social work, human services and social sciences.

UniSA STEM is at the forefront of cross-disciplinary collaboration developing the next wave of innovative thinkers and new possibilities. Harnessing connections across science, technology, engineering and mathematics, it creates innovative solutions and groundbreaking developments across teaching, learning and research.

The University of South Australia is ranked within the top 300 universities worldwide by the QS World University Rankings [35] and 251-300th ranking bracket by the 2020 Times Higher Education World University Rankings.[36] UniSA Business School is fully accredited by EQUIS, which accredited fewer than 200 universities worldwide.[37] In 2015 in the Excellence in Research for Australia rankings, 97% of UniSA's research was rated at world class or above.[38] In 2018, this was upgraded to 100% of UniSA's research at or above world class.[39]

Research Institutes The University of South Australia is home to three flagship institutes:

University of South Australia Students Association (USASA, formerly UniLife) is a democratic organisation run by students. USASA provides administrative support to over 100 sporting and social clubs, a range of events throughout the year and free advocacy and advice services, and also produces the UniSA student magazine Verse Magazine.

After the passing of the voluntary student unionism legislation the activities and collective voice of students was significantly diminished. However this has spurred the student association to work hard to offer students better value for money.[citation needed]

UniSA Sport, which manages the sporting life of students at the university, organizes and facilitates the development of sport clubs and activities on campuses. UniSA sport teams participate annually in both national and regional intercollegiate competitions such as the Australian University Games as well as the Southern University Games between Victorian, Tasmanian and South Australian universities.

Doctor of the University

The university awards the Honorary Doctorate to recognise an individual who has achieved eminence in an area of education or research, or is distinguished by eminent service to the community.[42]

The honorary doctorate is not a recognised qualification and as such the title 'Doctor' is not used by recipients, but the Post-nominal letters "DUniv" is granted.