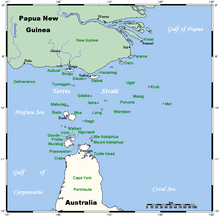 There are five distinct peoples within broader designation of Torres Strait Islander people, based partly on geographical and cultural divisions. There are two main Indigenous language groups, Kalaw Lagaw Ya and Meriam Mir, and Torres Strait Creole is also widely spoken, as a language of trade and commerce. The core of Island culture is Papuo-Austronesian, and the people traditionally a seafaring nation. There is a strong artistic culture, particularly in sculpture, printmaking and mask-making. 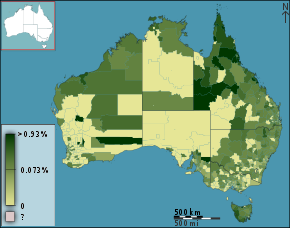 Torres Strait Islanders as a percentage of the population in Australia, 2011 census

Of the 133 islands, only 38 are inhabited. The Islands are culturally unique, with much to distinguish them from neighbouring Papua New Guinea, South-east Asia and the Pacific Islands. Today the society is multicultural, having attracted Asian and Pacific Island traders to the beche-de-mer, mother-of-pearl and trochus shell industries over the years.[4]

There are five Torres Strait Islander and Aboriginal Australian communities living on the coast of the Queensland, mainly at Bamaga, Seisia, Injinoo, Umagico and New Mapoon on the Northern Peninsula area of Cape York.[7]

Until the late 20th century, Torres Strait Islanders had been administered by a system of elected councils, a system based partly on traditional pre-Christian local government and partly on the introduced mission management system.[8]

Today, the Torres Strait Regional Authority, an Australian government body established in 1994 and consisting of 20 elected representatives, oversees the islands, with its primary function being to strengthen the economic, social and cultural development of the peoples of the Torres Strait area.[9]

Further to the TSRA, there are several Queensland LGAs which administer areas occupied by Torres Strait Islander communities:

Torres Strait Islander people are of predominantly Melanesian descent, distinct from Aboriginal Australians on the mainland and some other Australian islands,[11][12] and share some genetic and cultural traits with the people of New Guinea.[13]

Pre-colonial Island people were not an homogeneous group and until then did not regard themselves as a single people. They have links with the people of Papua New Guinea, several islands being much closer to PNG than Australia, as well as the northern tip of Cape York on the Australian continent.[14]

Sources are generally agreed that there are five distinct geographical and/or cultural divisions, but descriptions and naming of the groups differ widely.

There are two distinct Indigenous languages spoken on the Islands, as well as a creole language.[11]

The Western-central Torres Strait Language, or Kalaw Lagaw Ya, is spoken on the southwestern, western, northern and central islands;[15] a further dialect, Kala Kawa Ya (Top Western and Western) may be distinguished.[4] It is a member of the Pama-Nyungan family of languages of Australia.

Meriam Mir is spoken on the eastern islands. It is one of the four Eastern Trans-Fly languages, the other three being spoken in Papua New Guinea.[15] 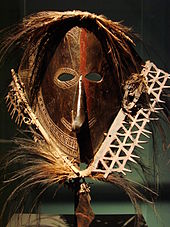 Archaeological, linguistic and folk history evidence suggests that the core of Island culture is Papuo-Austronesian. The people are agriculturalists as well as engaging in hunting and gathering. Dugong, turtles, crayfish, crabs, shellfish, reef fish and wild fruits and vegetables were traditionally hunted and collected and remain an important part of their subsistence lifestyle. Traditional foods play an important role in ceremonies and celebrations even when they do not live on the islands. Dugong and turtle hunting as well as fishing are seen as a way of continuing the Islander tradition of being closely associated with the sea.[16] The islands have long history of trade and interactions with explorers from other parts of the globe, both east and west, which has influenced their lifestyle and culture.[17]

The Indigenous people of the Torres Strait have a distinct culture which has slight variants on the different islands where they live. Cultural practices share similarities with Australian Aboriginal and Papuan culture. Historically, they have an oral culture, with stories handed down and communicated through song, dance and ceremonial performance. As a seafaring people, sea, sky and land feature strongly in their stories and art.[18]

Post-colonisation history has seen new cultural influences on the people, most notably the place of Christianity. After the "Coming of Light" (see Religion section), artefacts previously important to their ceremonies lost their relevance, instead replaced by crucifixes and other symbols of Christianity. In some cases the missionaries prohibited the use of traditional sacred objects, and eventually production ceased. Missionaries, anthropologists and museums "collected" a huge amount of material: all of the pieces collected by missionary Samuel McFarlane, were in London and then split between three European museums and a number of mainland Australian museums.[19]

In 1898–9, British anthropologist Alfred Cort Haddon collected about 2000 objects, convinced that hundreds of art objects collected had to be saved from destruction by the zealous Christian missionaries intent on obliterating the religious traditions and ceremonies of the native islanders. Film footage of ceremonial dances was also collected.[20] The collection at Cambridge University is known as the Haddon Collection and is the most comprehensive collection of Torres Strait Islander artefacts in the world.[18]

During the first half of the 20th century, Torres Strait Islander culture was largely restricted to dance and song, weaving and producing a few items for particular festive occasions.[19] In the 1960s and 1970s, researchers trying to salvage what was left of traditional knowledge from surviving elders influenced the revival of interest in the old ways of life. An Australian historian, Margaret Lawrie, employed by the Queensland State Library, spent much time travelling the Islands, speaking to local people and recording their stories, which have since influenced visual art on the Islands.[21]

Mythology and culture, deeply influenced by the ocean and the natural life around the islands, have always informed traditional artforms. Featured strongly are turtles, fish, dugongs, sharks, seabirds and saltwater crocodiles, which are considered totemic beings.[17]

Torres Strait Islander people are the only culture in the world to make turtleshell masks, known as krar (turtleshell) in the Western Islands and le-op (human face) in the Eastern Islands.[18]

Prominent among the artforms is wame (alt. wameya), many different string figures.[22][23][24]

Elaborate headdresses or dhari (also spelt dari[25]), as featured on the Torres Strait Islander Flag, are created for the purposes of ceremonial dances.[26]

The Islands have a long tradition of woodcarving, creating masks and drums, and carving decorative features on these and other items for ceremonial use. From the 1970s, young artists were beginning their studies at around the same time that a significant re-connection to traditional myths and legends was happening. Margaret Lawrie's publications, Myths and Legends of the Torres Strait (1970) and Tales from the Torres Strait (1972), reviving stories which had all but been forgotten, influenced the artists greatly.[27][28] While some of these stories had been written down by Haddon after his 1898 expedition to the Torres Strait,[29] many had subsequently fallen out of use or been forgotten.

In the 1990s a group of younger artists, including the award-winning (b.1973), started translating these skills into the more portable forms of printmaking, linocut and etching, as well as larger scale bronze sculptures. Other outstanding artists include (1970-2012), known for his decorated black and white linocuts of the local vegetation and eco-systems, and (b.1975). These and other Torres Strait artists have greatly expanded the forms of Indigenous art within Australia, bringing superb Melanesian carving skills as well as new stories and subject matter.[18] The College of Technical and Further Education on Thursday Island was a starting point for young Islanders to pursue studies in art. Many went on to further art studies, especially in printmaking, initially in Cairns, Queensland and later at the Australian National University in what is now the School of Art and Design. Other artists such as Laurie Nona, Brian Robinson, David Bosun, Glen Mackie, Joemen Nona, Daniel O'Shane and Tommy Pau are known for their printmaking work.[21]

An exhibition of Alick Tipoti's work, titled Zugubal, was mounted at the Cairns Regional Gallery in July 2015.[30][31]

For Torres Strait Islander people, singing and dancing is their "literature" – "the most important aspect of Torres Strait lifestyle. The Torres Strait Islanders preserve and present their oral history through songs and dances;...the dances act as illustrative material and, of course, the dancer himself is the storyteller” (Ephraim Bani, 1979). There are many songs about the weather; others about the myths and legends; life in the sea and totemic gods; and about important events. "The dancing and its movements express the songs and acts as the illustrative material".[32]

Artist Ken Thaiday Snr is renowned for his elaborately sculptured dari, often with moving parts and incorporating the hammerhead shark, a powerful totem.[33][34]

Christine Anu is an ARIA Award-winning singer-songwriter of Torres Strait Islander heritage, who first became popular with her cover version of the song "My Island Home" (first performed by the Warumpi Band).[35]

The people still have their own traditional belief systems. Stories of the Tagai represent Torres Strait Islanders as sea people, with a connection to the stars, as well as a system of order in which everything has its place in the world.[36] They follow the instructions of the Tagai.

One Tagai story depicts the Tagai as a man standing in a canoe. In his left hand, he holds a fishing spear, representing the Southern Cross. In his right hand, he holds a sorbi (a red fruit). In this story, the Tagai and his crew of 12 were preparing for a journey, but before the journey began, the crew consumed all the food and drink they planned to take. So the Tagai strung the crew together in two groups of six and cast them into the sea, where their images became star patterns in the sky. These patterns can be seen in the star constellations of Pleiades and Orion.[37]

From the 1870s, Christianity spread throughout the islands, and it remains strong today among Torres Strait Islander people everywhere. The London Missionary Society mission led by Rev. Samuel Macfarlane arrived on Erub (Darnley Island) on 1 July 1871, establishing its first base in the region there. The Islanders refer to this as "The Coming of the Light", or "Coming of Light"[39] and all Island communities celebrate the occasion annually on 1 July.[40] However the coming of Christianity did not spell the end of the people's traditional beliefs; their culture informed their understanding of the new religion, as the Christian God was welcomed and the new religion was integrated into every aspect of their everyday lives.[39]

In the 2016 Census, Australia's Indigenous and non-Indigenous population were broadly similar with 54% (vs 55%) reporting a Christian affiliation, while less than 2% reported traditional beliefs as their religion, and 36% reported no religion. A total of 20,658 Torres Strait Islander (out of a total of 32,345 population in Australia) and 15,586 of both Torres Strait Islander and Aboriginal identity (out of 26,767) reported adherence to some form of Christianity.[41]

A traditional cultural practice, known as kupai omasker, allows adoption of a child by a relative or community member for a range of reasons. The reasons differ depending on which of the many Torres Islander cultures the person belongs to, with one example being "where a family requires an heir to carry on the important role of looking after land or being the caretaker of land". Other reasons might relate to "the care and responsibility of relationships between generations". There has been a problem in Queensland law, where such adoptions are not legally recognised by the state's Succession Act 1981,[42] with one issue being that adopted children are not able to take on the surname of their adoptive parents.[43]

On 17 July 2020 the Queensland Government introduced a bill in parliament to legally recognise the practice.[44]