This article incorrectly defines the capital city of South Australia as "Adelaide" (i.e. the greater metropolitan area) rather than the "City of Adelaide". The capital city is defined by the City of Adelaide Act 1998 [1] as being the City of Adelaide. This only includes the Adelaide City Council area as defined by the legislation and not all the other areas as referenced by this wiki (i.e. it does not include the rest of suburban Adelaide). I think this needs to be changed (talk) 04:54, 30 October 2019 (UTC)

Current diff lists the area of Adelaide as 16km^2, which is barely the size of the city centre. Even the City of Adelaide LGA is about 4 times that size. This ref gives an area of Greater Adelaide as 325,766 hectares (3,257.66 km2), however this will make the population density statistic anomalous. Should this article list the area of Greater Adelaide, the Adealide Metropolitan Area, or the City of Adelaide? Or all three? In any case, the uncited area of 16 square kilometres needs to change. --Yeti Hunter (talk) 00:30, 11 November 2019 (UTC)

Have looked into this a little more and found the following. The ABS considers Greater Adelaide to include the Adelaide Hills and Mount Barker, while both the SA government and Regional Development Australia exclude those two LGAs. The City of Adelaide (CBD, North Adelaide and parklands) is in fact 15.57 square km (not sure where I got the above mistake from), but I don't think its really relevant for this article, which is about the entire city, rather than just the city centre LGA. --Yeti Hunter (talk) 03:18, 11 November 2019 (UTC)

For consistency all Australian cities use the ABS GCCSA classification for capital city metro areas not state-based classifications. These are the accepted definitions.--StormcrowMithrandir 23:28, 15 November 2019 (UTC) 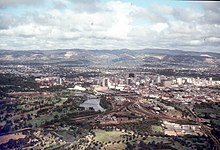 Adelaide from the air c1980

Thanks to WMAU I have been digitizing 35mm slides here in Perth taken by EW Digby, I thought you might appreciate this gem Gnangarra 11:14, 17 July 2020 (UTC)