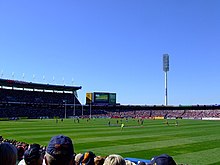 Sport plays an important role in the business, community, social and cultural life in South Australia.

Sport as entertainment plays an important role with South Australia having the second highest rate of event attendance of all states and territories with 49% of South Australians aged 15 years and over attending a sporting event each year.[1]

Regional and rural opportunities to participate in sport plays an important role in community life throughout SA.[2] SA has developed a range of programs in supporting inclusive sports pathways focusing on specific populations groups such as indigenous, mature-aged, early childhood, people with disabilities and women.[3]

Research shows two thirds of South Australians are involved in sport or recreation with around forty percent of those involved, participating in organised sporting activities. Significantly people from regional areas are more likely to participate through a club based structure and are more likely to volunteer and to be a spectator than those in the Adelaide metropolitan area. It is estimated regional communities have an estimated one third of adults participating in exercise recreation and sport via a club or association and almost a quarter are involved as a coach, official, umpire or administrator.[2]

Research shows walking, running, swimming, aerobics/fitness, golf, lawn bowls, weight training and cycling to be the most popular sports with strong participation by both men and women in South Australia.[2] Historically not all sports have been available to women but that has changed with equal opportunity laws targeting discrimination based on gender.

Differences in participation rates by men and women relate to the football codes and netball, which have in the past been limited by opportunities for participation by genders not traditionally associated with the sport.[2]

Australian rules football is the most popular spectator sport in South Australia with an attendance level (of at least one match per year) of 31% of the population, compared with a national average of 16%.[1]

In 1990 a group of women established the South Australian Women's Football League after an exhibition match against Victoria. The league has seen seven of its state representatives making the All-Australian team which is selected from participants at the AFL Women's National Championships.

In May 2013, the Australian Football League created a 'draft' for women to form two teams from the top 50 women Australian rules footballers in the nation to participate in an exhibition game before the Round 14 Melbourne versus Bulldogs AFL teams.[10] Many South Australian women chose to nominate. Melbourne Demons drafted Alexandra Price from Port Adelaide FC and Bronwyn Davey from Greenacres FC while Western Bulldogs drafted Courtney Cramey, Morphetville Park.

Netball is a significant sport in South Australia with a wide range of participation opportunities across metropolitan, regional and rural locations within the state.

The Adelaide Thunderbirds have participated in the premier netball league in Australasia, winning premierships in 1998, 1999 in the CBT, and 2010 in the ANZ Championship. Many South Australian players have represented Australia, including World Championship player and Australian captain Natalie von Bertouch, Rebecca Sanders and Kathryn Harby-Williams.

Netball continues to have a strong metro, regional and intrastate competition throughout South Australia with around 70,000 women and men participating across the state.[2]

Cricket is a popular sport in South Australia and attracts big crowds in the men's game at the top level. It is popular with both boys and girls at community level and there are high performance pathways available for men and women. South Australia's representative cricket teams, the Redbacks for men and the SA Scorpions for women participate in national competitions. 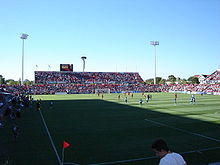 South Australia's sole representative in the national A-League competition is Adelaide United FC. They won the 2016 A-League Grand Final and have won two and have made the finals every year except for 2009 and 2012 since the A-league started in 2005. Adelaide United have been one of the most successful teams in the A-league, despite failing to win an A-league Grand Final in their first two attempts. They have qualified for the AFC Champions League 4 times, making them the most represented club in Australia. Of these appearances they made the round of 16 in 2010, were runners up in 2008, and have made the round of 16 in the ongoing 2012 AFC Champions League. Their home ground is Hindmarsh Stadium, which has a capacity of 16,500. Hindmarsh was one of four non-Sydney venues chosen to host matches as part of the Men's Football tournament during the 2000 Summer Olympic Games.

During the 1990s, Adelaide City was one of Australia's most dominant soccer clubs, winning two national titles in three seasons.

SASi Pirates were National Champions in 1997 and 98 in the Women's National Soccer League. Adelaide United 'Lady Reds' compete in the current national competition, the W-League. The state has produced Australian representatives such as Sharon Black and Dianne Alagich who have contributed to the international success of the Matlidas.

South Australia is home to , which has a 12 club division 1 competition in the Adelaide metropolitan area.

Adelaide was also home to the former Adelaide Giants in the defunct Australian Baseball League. A new baseball league was approved by the SA sports commission and started in November 2010. Adelaide's team is called the Adelaide Bite. They formerly played their home games at Norwood Oval, but moved to the Diamond Sports Stadium in 2016 due to renovations at Norwood.

Titanium Security Arena, the home of basketball in South Australia

South Australia has a long history of producing outstanding representatives which have shaped and influenced Australia's high international standing in both men's and women's basketball. High profile players and coaches include Olympians Lindsay Gaze, Phil Smyth, Peter Ali, Darryl Pearce, Mark Bradtke, Mike McKay, Tony Ronaldson, Brett Wheeler, Paul Rogers, Brad Newley and Brett Maher, as well as other Australian Boomers such as NBA players including Luke Schenscher (also a 36ers player) and Joe Ingles all came from (and in some cases still live in) Adelaide.

In women's basketball SA has produced outstanding Olympians including Rachael Sporn, Erin Phillips and Laura Hodges. SA teams have won numerous national championships, with the winning in 1990 while finishing runner up in 1981 (the inaugural season of the WNBL) and 1988. The Adelaide Lightning creating a historic era of success in 1994, 1995, 1996 and 1998 where it won 4 out of 5 National Championship Finals in the WNBL, as well as 2007–08. The Lightning also finished runner up in 1997 and 1999–2000. The West Adelaide Bearcats finished as WNBL runner up in 1984 while the Noarlunga Tigers finished runner up in 1985. Adelaide born Brendan Flynn was the coach of the Australian Opals at the 1984 Summer Olympics.

SA Coach Peter Koshnitsky having established a women's lacrosse program with the South Australian Sports Institute helped forge this success in partnership with outstanding leader and Australian & State captain and World Champion, Jenny Williams and other players of this era. The legacy of this era was highlighted by the continued success by South Australian teams at national championship level with success in 1997 and a further run of wins with six in a row from 1999 until 2005.

South Australia has produced significant players during this period who have had incredible careers at international level contributing importantly to the 1986 and 2005 IFWLA World Championship victories.[14] Many South Australian players have also had success in the United States' NCAA Women's Lacrosse Competition including Hannah Nielsen and arguably the world's best player, Australian World Champion, Jen Adams.

In Men's Lacrosse South Australia has won 12 National Championships including three in a row from 2001 - 2003, and won again in 2012. In 2003 Peter Inge became the first Australian to play in Major League Lacrosse in the USA.

Lacrosse SA is the peak body for lacrosse in South Australia, managing competitions for Women and Men, and Girls and Boys from age 8 to adults. While the primary focus revolves around the main field lacrosse season from April to September, differing formats of lacrosse including Box Lacrosse, Junior and Senior indoor competitions, modified preseason, University and High School competitions offer opportunities to enjoy lacrosse year round.[15]

South Australian women have featured prominently in the Hockeyroos. In fact in 1914 in the very first Australian women’s test vs England, SA had five players in the Australian team as well as coach Judy Smith.[16] In the 1980s and 1990s, South Australia saw many fine players achieving Olympic success including Sandra Pisani, Juliet Haslam and Alison Peek. State representative team SASI Suns won the National Championship in 1995 and the Southern Suns won in 2011 competing in the Australian Hockey League.

South Australia last won the national championship in 1956 but has produced representatives at international and Olympic level including and Simmone Morrow.

The state rugby league federation is the South Australian Rugby League.[17] The game traces its roots in the state back to the 1940s, when the Port Adelaide rugby union team split in four, and defected to rugby league.

South Australia's only professional rugby league team, the Adelaide Rams, had a short but eventful existence. Originally the Australian Rugby League planned to relocate a Sydney team to Adelaide but the Super League war and the SARL's decision to align themselves with the News Ltd Super League in 1995 shut that idea down. Later in 1995, with Super League still only consisting of nine teams and Melbourne still aligned with the ARL, a decision was made to give Adelaide the 10th Super League license.[18]

Brought into existence for the 1997 Super League season, the team had instant success. In 1998 they were selected to join the 20-team National Rugby League; however, rumours abounded that they were to be axed from the 1999 season as part of a rationalisation of teams (from 20 to 14) in the competition. At present however, the South Australian Rugby League still operates a local semi-professional competition consisting of both junior and adult teams from across Adelaide.

South Australian Rugby Union or "SA Rugby" is the governing body in the state.[19]