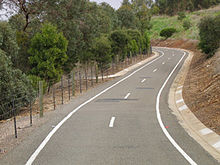 The Southern Expressway (route M2) is an 18.5 km (11.5 mi) freeway[1] in the southern suburbs of Adelaide, South Australia, between Bedford Park[2] and Old Noarlunga. It is the southern part of the North–South Corridor which extends the full length of Adelaide and is being built to urban freeway standard.

The Southern Expressway was built as a corridor to relieve heavy traffic from the major arterial, Main South Road, in Adelaide's south. It was originally built as a reversible one way freeway, and was the world's longest after its completion in 2001. Between 2010 and 2014 it was expanded and it is now a regular 2-direction freeway.

The expressway is the southern part of a north-south freeway originally conceptualised under the Metropolitan Adelaide Transport Study (MATS), completed in 1965, as a freeway bypassing the city from Dry Creek to Old Noarlunga.[3] The MATS plan proved unpopular, and in 1971 all further highway construction in Adelaide was postponed for a period of ten years. In 1983 plans for the freeway north of Darlington were abandoned, and the land that had been set aside was progressively sold off.

Phase 2 became the expressway, which was to be constructed in two stages: from Darlington to Reynella, and from Reynella to Old Noarlunga. It was developed as a one-way reversible road with future duplication provided for in the roadworks base, to be constructed when the need arose. It used the remaining "Noarlunga Freeway" reservation, except for the northernmost kilometre where a new route through O'Halloran Hill was chosen to provide high-quality links with Marion and Main South Roads without interfering with existing infrastructure at Sturt.

Construction of the reversible freeway

During its construction and for some time after its opening, the expressway was promoted via a dedicated FM radio station established by the Department of Transport broadcasting via a low-power FM transmitter in the immediate vicinity of the road.[4] The radio station broadcast a recorded message on continuous loop featuring promotional and community information messages relating to the expressway, including a jingle that Transport Minister Diana Laidlaw declared made the expressway the only road in the world to have its own jingle.[citation needed]

Operation as a one way road

Until August 2014, the expressway was open approximately 21 hours per day, one way for over 10 hours in each direction. The northbound (city-bound) direction occurred on weekday mornings (2:00 am – 12:30 pm) and weekend evenings (2:00 pm – 12:30 am), the southbound direction on weekday evenings (2:00 pm – 12:30 am) and weekend mornings (2:00 am – 12:30 pm).[5] It was closed 12:30–2:00 am and 12:30–2:00 pm, except for Saturday and Monday mornings when the direction remained unchanged. Weekday public holidays also operated under the weekend's opening times to accommodate tourists travelling to the Fleurieu Peninsula. During each closure all road signs, lights and boom gates changed over, and the road was inspected by a tow truck contractor for debris and car breakdowns.

In 2007 the Howard Government pledged $100m towards widening the expressway in its unsuccessful re-election bid.[6]

On 17 February 2010, during the state election campaign, Premier Mike Rann announced that, if re-elected the expressway would be duplicated in a A$445m project.[7] However, the inclusion of a new A$75m interchange at Darlington was later scrapped, after the government planning for a major transport hub at Darlington discovered the need for a $50 million section of road that would have to be destroyed when the expressway was eventually duplicated.[8]

Once duplication was announced in 2010, construction started one year later in 2011. The first construction-related expressway closures were 3 consecutive days in January 2012, out of peak hours, but is the most disruption the road has experienced since the opening of Stage 2, with only day-long resurfacing of line-marking, and cycle rides disrupting the expressway previously.

Due to the duplication of the Expressway, all of the bridges had to be widened to meet the new width of the road.[citation needed] Some road bridges were closed during the work needed, and others required a temporary lower speed limit for safety reasons. This caused some anger to residents and businesses.[9]

The new road was built entirely on the western side of the original roadway, and is four lanes wide between Reynella and Marion Road in the northbound. Accessibility has been improved with the project, with completely new intersections at Beach Road and Sheriffs Road, as well as being able to left turn out at Old Noarlunga, right turn out at Marion Road, and left turn in at Marion Road.[10] 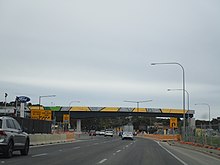 Ayliffes Road bridge: The above ground road bridges were assembled on-site and moved into their final position using multi-wheeled lifters.

In 2014 the abandoned plans for an interchange at Darlington were revived and expanded to extend the Southern Expressway through Darlington.[13] The original project scope was to extend the expressway with a lowered motorway corridor passing underneath Flinders Drive (access to Flinders University and Flinders Medical Centre), Sturt Road and a bridge connecting local streets Mimosa Terrace and Sutton Road, to the intersection of South Road, Ayliffes Road and Shepherds Hill Road with surface-level service roads and segreggated cycling and pedestrian paths; however, the project was later revised to continue the extension past Tonsley giving a total length of 3.3 kilometres. A road bridge, accessible from the Main South Road surface road and the lowered motorway, also allows northbound traffic free-flow access to Ayliffes Road. The associated Flinders Link Project is extending the Tonsley railway line over this corridor to Flinders Medical Centre.[14]

Early works commenced late in 2014 and Gateway South, a joint venture of Fulton Hogan and Laing O'Rourke was awarded the major works contract for the project in January 2016. Major works commenced in 2016 for an expected project completion in 2018,[15] later revised to December 2019. Completion was further delayed to 2020 due to sections of the lowered motorway wall having collapsed.[16][17]