Police force of the Australian state of South Australia

Formally established in 1838 under Henry Inman,[3] the force is the oldest in Australasia and it is the third oldest organised police force in the world. Unlike other Australian police forces, which originally employed soldiers or former convicts, the South Australia Police enlisted only volunteers. This occurred because South Australia was the only free colony on the continent.[3]

The early stages of the force

Mounted Police Barracks in 1890 with policemen on parade

In the early stages of the force, the staffing team consisted of ten mounted constables and ten foot constables under the command of the Inspector Henry Inman.[citation needed]

By 1840, Major Thomas Shouldham O'Halloran was appointed as the first official Commissioner of Police. At this time, SAPOL consisted of one Superintendent, two Inspectors, three Sergeants and 47 Constables divided into foot and mounted sections.[citation needed]

From 1848 to 1867, SAPOL also served as the state fire and rescue service, until the precursor of the South Australian Metropolitan Fire Service was formed. They also supplied the Civil Ambulance Service from 1880 to 1954, when it was taken over by the St John Ambulance Service.[citation needed] 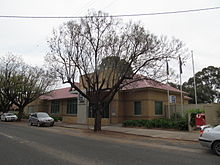 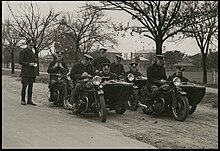 Services and actions for the state

Significant changes SAPOL has made to policing

Services are based on Local Service Areas (LSA) which provide operational policing services,[36] and Branches, which provide other specialised services or assistance.[37] These areas are further broken down into Sections. Larger sections may be divided into a number of Teams.

Local Service Areas are the main organisational unit to provide policing services to the public. A local service area contains a number of police stations, and specialist services to support frontline police such as Detectives, Crime Scene Investigators and Traffic police.[38]

Each LSA has a designated office known as a 'Complex' where majority of operations in the area start. The LSA then have smaller community police stations for quick policing access.

SAPOL has specific divisions to handle different roles within the organisation. All members of these units are specifically trained for the roles that accompany their division. 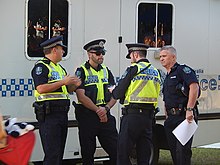 Police officers in the standard uniform of dark navy blue. Country staff still have the choice of wearing khaki pants

An Assistant Commissioner is the manager of a Service, such as Northern Operations Service or Crime Service.

SAPOL issues uniforms to sworn police officers. Police officers working in non-specialised areas generally wear standard uniform, which consists of a navy blue collared shirt with attached police badges and navy blue slacks. Short and long sleeve shirts are worn as preferred. Police officers can choose between either a dark blue peaked hat, or an Akubra wide brimmed hat and are not required to wear a tie. Baseball caps are worn in specialist areas, including STAR Group, Crime Scene, State Traffic Enforcement Section, and by Operational Safety Trainers. Officers in northern country areas wear khaki uniforms instead of blue. PSO (Police Security Officers) wear a slightly different shirt. The shirts and slacks are also navy blue, but they have golden marking and PSO badges. In the past, the shirt was white. This was changed at the end of 2019.

In 2010 SAPOL started consultations on a new darker uniform reminiscent of those worn by officers of the NYPD and LAPD. In 2012 SAPOL announced the new uniform would be introduced in mid October 2012 and would be rolled out over 18 months.[45] The only visible change from the consultation period was to the Peaked cap. The white peak was changed to the same dark blue as the shirt and pants, which is called ink blue. The STAR group officers uniforms were not changed.

Standard equipment issued to almost all officers are:

Criminal Investigation Officers are issued with the compact version of the semi-automatic pistol (M&Pc). Specialised units such as Special Tasks and Rescue (STAR Group) use other equipment suited to the nature of their duties.[citation needed] SA Police were among the last to carry revolvers as a duty weapon. They carried Smith & Wesson Model 66 (a variant of the Model 19) revolvers in .357 Magnum until the switch to the Smith & Wesson M&P semi automatic in 2009.[48]

SAPOL officers use a number of vehicles in day-to-day duties. The primary vehicles that are used by patrol members is the Holden Commodore and the Kia Sorento. Also used are VW Transporter, Ford, Toyota Camry, Toyota Hilux, Toyota Kluger and Holden Colorado caged vehicles for prisoner transport. In remote country areas, Toyota Land Cruisers and Troop Carriers are used as primary patrol vehicles. Patrol cars are used in both marked and unmarked variants, with the latter being a bit more extensive in its vehicle composition. SAPOL have also, in previous years, used high performance vehicles such as Holden's SS Commodore for traffic operations, However, in recent years they have only maintained a fleet of distinctly marked base model Holdens to perform traffic duties.

Members of the State Traffic Enforcement Section ride marked and unmarked Honda and BMW motorcycles for traffic, escort, and other duties.

SAPOL have the use of several Police Operations Vehicles which are used in a wide variety of ways, for example, as a mobile police station/unit at a large public function, or as forward command posts at search and rescues, or other incidents such as siege or hostage situations. STAR Group also possess a Lenco BearCat armoured vehicle available for use in siege or terrorist situations.[51]

The SAPOL Water Operations Unit uses a number of watercraft to police coastal and inland waterways. Members of STAR Group and Transit Services Branch act as crew members on a Eurocopter EC130 helicopter operated by the Motor Accident Commission Rescue Helicopter Service.[52] Officers also crew other helicopters operated by the MAC Rescue Helicopter Service dependent on the mission. Helicopters are multi-role and are used for search and rescue operations, crime prevention and police pursuits.[52] The SAPOL also use a Pilatus PC-12 aircraft.[53]

For ceremonial activities, crowd control and patrol duties, the SAPOL Mounted Operations Unit use grey horses. They are bred and trained at the , in Park 27 of the Adelaide Park Lands, just north-east of the Adelaide city centre. These Police 'Greys' as they are known, are ideal for Police work as the light grey tones make the horse highly visible at night. They are also highly recognisable in the community and are often involved in community events such as leading the annual Credit Union Christmas Pageant and ANZAC day parade.[54]<

Recruit training is conducted at the SAPOL Police Academy located adjacent to the old barracks adjacent to Fort Largs in the north-western Adelaide suburb of Taperoo. Cadets undergo a 52-week course, called the 'Constable Development Program' (CDP).[55] The CDP is broken down into 5 phases, which includes training at the Police Academy and field experience at metropolitan LSAs.[55] Police cadets learn law, about investigations and police procedures. During recruit training, non-officers (police staff and volunteers) assist with various duties, such as cadet assessment, role playing and general administration. Cadets also undertake operational safety training, including self-defence and the use of firearms. Practical role-playing and assessments are part of the course.[55] Training with police dogs and police horses is offered at the Thebarton Police Barracks. Earlier, training was being held at the older Academy located next to the present one.

Graduation and aftermath for new officers

Training is ongoing and further courses are available for officers to attend, should they wish to progress their policing career further.

SAPOL Protective Security Officers also undergo training at this location. The duration of this training course is only 12 weeks.

SAPOL refers to the communications operation as VKA. At 0400 hours (or 4am) on Tuesday 10 December 2002, SAPOL officially switched from standard 64 UHF channels to the SAGRN. This utilized digital encrypted radio transmissions meaning that scanners could not listen to police communications. While at first there seemed to be technical issues with the new system, they were quickly resolved and the department now has full trust in the system.

SAPOL still have UHF licences and it is plausible they are available as back-up communication channels. SAPOL uses three primary devices for voice communication over the network. They are Spectra W7 mobile, XTS 5000 portable and Spectra W3 mobile. These can be controlled via the RCH3000 desktop controller, used in fixed locations generally by trained operators.

These devices have a number of features that are regularly used in patrols. These features include private call, page alert and telephone interconnect.

Private call allows units to directly talk to another unit without dispatch, or other users in the talkgroup to hear. However, this comes with the inability for dispatch to contact either unit. Page function alerts another radio that someone else is attempting to contact them. Telephone interconnect enables units to make and answer calls through the system. However, only supervisors have the ability to make and answer to any number, general patrols are restricted to only a list of certified SAPOL numbers. Each LSA has two assigned 'talkgroups'.

COMCEN (Communications) have assigned talkgroup IDs, allowing them to pair an LSA's primary and secondary talkgroups together allowing control to manage two channels at once. The Secondary channel is often used for local/chat, dispatch lowers the volume of the secondary channel, which enables them to monitor the channels and talk to all units on duty in the LSA.[57]

SAPOL use location-based call signs. Units are called in by stating the station they come from followed by a designated number.