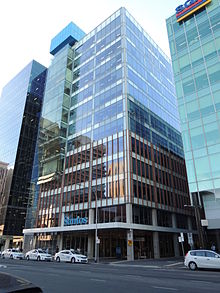 Santos is one of Australia's domestic gas producers, supplying sales gas to all mainland Australian states and territories, ethane to Sydney, and oil and liquids to domestic and international customers.[3] The company's core business was built on gas and oil discoveries in the Cooper Basin, predominantly spanning north-east South Australia and South West Queensland. These gas reserves are one of the sources of natural gas to Australia's eastern states. Santos is the primary venture partner and operator of natural gas processing facilities at Moomba (in South Australia) and Ballera (in Queensland), and pipelines connecting those facilities with Adelaide, Sydney, Melbourne, Brisbane, Rockhampton and Mount Isa.[citation needed] One of the pipelines is the Moomba Adelaide Pipeline System which carries gas to Adelaide and regional South Australia.

It has made significant discoveries in the Browse Basin, off the northwest of Western Australia. On 22 August 2014 the company announced a major gas-condensate discovery at the Lasseter-1 exploration well in WA-274-P in the basin, in which Santos has a 30% interest in company with Chevron (50%) and Inpex (20%). It was the second major discovery by the company in the area in two years.[4]

Santos has its headquarters in Adelaide. It also has offices in Brisbane, Sydney, Perth and Jakarta. Since February 2016 the company's CEO has been . He was preceded by David Knox.

In August 2018, Santos announced the acquisition of Australian oil and gas company Quadrant Energy for $2.15 billion. As part of the deal, Santos will obtain Quadrant's 80% stake in Dorado in the Bedout Basin in northern Western Australia.[5]

The company also participates in on- and off-shore oil and gas exploration and production ventures throughout Australia, in the Timor Gap, Indonesia, Papua New Guinea, India, Bangladesh, Egypt, Vietnam and Kyrgyzstan.[3]

Santos has an interest in the Darwin LNG project, exporting liquefied natural gas to customers in Japan. It is also a partner in the development of the Gladstone LNG project in Queensland and in the PNG LNG project.[3] On 7 September Santos pledged to divert 30 petajoules of gas from the Gladstone LNG plant slated for export into Australia's east coast market in 2018 and 2019, as part of efforts to avert government-imposed restrictions on gas exports to solve local gas shortages.[2] Because of shortages in its own supply of gas for export, Santos rely on purchasing gas from third parties to supply its overseas contracts.

Santos' production for 2008 was 54.4 million barrels (8,650,000 m3) of oil equivalent.[1] Earnings before interest, taxes, depreciation, amortisations and exploration expenses for the period was A$2.8 billion, representing after tax profit of A$1.65 billion.[1] On 22 August 2014 the company said its oil production was at its highest level in six years. For the first half of 2014, Santos recorded sales revenue of $1.8 billion, an increase of 20% on the comparable period the previous year. Sales volumes rose by 5% to 28.9 million barrels of oil equivalent. As a result of the company writing off its investment in a coal seam gas project in Indonesia, the 2014 first-half profit being down 24% at $206 million.[4]

In 2015, Santos' financial troubles became more evident as the share price crashed to one third of its value from the previous year. It hit a 12-year low and has stayed low since. This occurred because of mounting debt and an oil price slump. CEO David Knox was forced to leave, with chairman Peter Coates stepping into the role and leading a strategic review of the gas company. Options of partial asset sale, even takeovers, has been speculated including "No options will be ruled out from consideration, but neither is any particular option a preferred course at this time," Coates said .[6]

In the financial year 2012–13, Santos Ltd gave donations directly to Labor, Liberal, LNP and National political parties at state and federal levels. Donations are tabled below.[11]

On 1 January 2004 an explosion occurred at Santos' Moomba processing facility. The blast was traced to the Liquids Recovery Plant (LRP), where an inlet manifold and a related flange weld both failed after corrosion by mercury. Mercury was released along with a cloud of flammable gases including methane, ethane, propane and butane. Workers saw the cloud and raised the alarm, shutting down the plant and evacuating to designated safety points.[12] Some workers allegedly did not hear the emergency alarms.[13] The gas cloud ignited on contact with a heating unit 150 metres away, and an explosion followed. The plant was seriously damaged.[12]

Moomba workers who sought to remain anonymous told The Australian newspaper on 5 January that the company was running a "cowboy" operation, and that it was luck, not management that had prevented any loss of life. They also said that the emergency muster area was too close to the plant in the event of a major tank explosion.[13]

Gas supplies to South Australia and New South Wales were interrupted, leading to down-time in the manufacturing sector and short-term rationing measures in both states while repairs were made. Santos spent $40 million on remedial action following the incident. In 2011, the South Australian industrial relations court ruled that 13 employees had been placed at risk due to critical safety shortcomings. These included an inadequate risk assessment which failed to identify the likelihood of plant failing due to liquid metal rendering it brittle. The company pleaded guilty to breaching the Occupational Health Safety and Welfare Act after a SafeWork prosecution and was fined $84,000.[12] 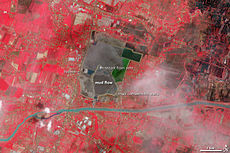 In May 2006, the Sidoarjo mud flow disaster occurred in East Java, Indonesia. Controversy exists surrounding the probable cause of the disaster which has displaced approximately 10,000 people and covered villages, farms and industrial areas with mud. The eruption is ongoing, though since 2011 the rate of flow has reduced.[14]

Santos had stated in June 2006 that it maintained "appropriate insurance coverage for these types of occurrences".[15]

In May 2008, groundwater contamination was reported to the Environment Protection Authority (EPA) following detection at Santos' Port Bonython site, Spencer Gulf, South Australia. Hydrocarbons were found floating on and in the groundwater. One hundred and fifty inspection wells were later established, and a 450-metre-long (1,480 ft) cement bentonite wall was constructed 'to stop the further spread of contamination off-site' including to the marine environment.[16][17] In May 2012, Santos reported declining rates of hydrocarbon recovery from groundwater extraction wells and claimed that their remediation efforts were working.[18]

In 2011, a 10,000-litre spill of untreated coal seam gas water occurred impacting native vegetation and soil in the Pilliga forest. Coal seam gas extraction produces water that can contain lead, mercury, various salts and other heavy metals. Rehabilitation has been trying to restore this site[19] to remediate elevated contamination in the soil.[20]

In May 2013, an uncontrolled oil spill was reported in Santos' Zeus field near Jackson in Queensland's remote south-west. The flow lasted 'almost a week' before international experts were able to contain it. The rate of flow was estimated at 50,000 litres per day.[21]

In 2013, groundwater monitoring detected elevated levels of salinity and heavy metals near Santos' Tintsfield ponds in the Pilliga forest. Also it was reported that at the Bibblewindi ponds, uranium 20 times above the safe drinking levels was detected.[22] A NSW Government investigation into the incident determined the leak was "small, localised and contained" and drinking water sources and stock and domestic water sources were not impacted nor were they at risk.[23] The Investigation also found that the uranium detected was not from the pond's water, but was from naturally occurring Uranium in the surrounding soil that was mobilised from the leaking pond.[24]

Santos' activities draw significantly on available water resources. In 2013, the three jurisdictions in which Santos withdrew the greatest volume of water were Indonesia (12.5 gigalitres), Queensland (7.5 gigalitres) and South Australia (7 gigalitres). The company's water resource extraction and use is published in an annual Sustainability Report.[25]

Santos sponsors the Museum of Economic Botany at the Adelaide Botanic Garden.

Santos sponsors many community activities, events, institutions and projects in jurisdictions where they operate commercially. In October 2014, The Advertiser claimed that Santos spends $10 million annually on South Australian community groups, events and institutions.[26] Figures published in Santos' 2014 Sustainability Report state that $7,487,731 was spent on 'Community investment' in South Australia that financial year and $3,108,057 in Queensland. Other jurisdictions received between $5,000 (South Korea) and $775,255 (Western Australia) and the total 'community investment' spent across all regions during 2013–14 was $13,217,617.[27]

In December 2014, photographs showing Queensland police vehicles featuring Santos company logos created controversy and pushed the topic of corporate sponsorship of police activity into the mainstream media. Santos contributed approximately $40,000 to the program. Queensland Police commissioner Ian Stewart described the vehicles as "PR vehicles that we use at shows, we use at expos, all of those sorts of things just as any PR machine would be used by a company or another government organisation."[37]

Online activists referred to the sponsorship as a "conflict of interest" and "a bloody disgrace" with Stop Brisbane Coal Trains spokesman John Gordon calling for the logos to be removed.[36] The Lock the Gate Alliance also spoke out against the deal. Spokesperson Drew Hutton stated that "Advertising a company like Santos, which is a big coal seam gas company in Queensland, on the side of vehicles of the police whose job it is to enforce the law – including I might add against protesters who don't like coal seam gas – is a really bad idea... Lock the Gate would not be able to sponsor a police car – nor should it. Neither should a company."[37]

Santos responded by stating that the company was "proud to support a program that promotes safe driving and is saving lives in outback Australia." Queensland's Police Minister Jack Dempsey defended the program and its sponsors stating "The Queensland Police Service's 'Stay on Track Outback' is an award winning road safety program aimed at keeping communities safer and reducing road trauma in regional Queensland. It has been in place since 2012 thanks to support from a number of sponsors."[36]

In 2015, the Frack Free NT Alliance called for the Darwin Festival to reject Santos sponsorship due to the company's involvement in shale gas exploration and development in the Northern Territory. Dayne Pratzky, a.k.a. Frackman, supported the call.[38]

In October 2014, the Australian National University sold its shares in Santos and several other companies in the nation's most reported case of fossil fuel industry divestment. Santos responded by claiming that gas is necessary in the state's future energy mix and The Advertiser published its economic value to the state. At the time it was reported that Santos employed 3500 people nationally, thousands of contractors and had a $13 billion market value.[33]

The University's Chancellor Gareth Evans told Australian Mining "Neither I nor the vice-chancellor nor any other ANU council member to my knowledge has described Santos specifically as a 'socially irresponsible' company." In a letter to Santos CEO David Knox, Evans said the university regretted any embarrassment suffered by Santos over the decision to divest.[41]