The Royal Institution building on Albemarle Street, London, circa 1838

The Royal Institution of Great Britain (often abbreviated as the Royal Institution or Ri) is an organisation devoted to scientific education and research, based in the City of Westminster. It was founded in 1799 by the leading British scientists of the age, including Henry Cavendish and its first president, George Finch, the 9th Earl of Winchilsea.[1] Its foundational principles were diffusing the knowledge of, and facilitating the general introduction of, useful mechanical inventions and improvements, as well as enhancing the application of science to the common purposes of life (including through teaching, courses of philosophical lectures, and experiments).[2]

Much of the Institution's initial funding and the initial proposal for its founding were given by the Society for Bettering the Conditions and Improving the Comforts of the Poor, under the guidance of philanthropist Sir Thomas Bernard and American-born British scientist Sir Benjamin Thompson, Count Rumford. Since its founding it has been based at 21 Albemarle Street in Mayfair. Its Royal Charter was granted in 1800.

Throughout its history,[3] the Institution has supported public engagement with science through a programme of lectures, many of which continue today. The most famous of these are the annual Royal Institution Christmas Lectures, founded by Michael Faraday in 1825.[4] The Royal Institution was founded as the result of a proposal by the American-born Bavarian Count Rumford for the "formation by Subscription, in the Metropolis of the British Empire, of a Public Institution for diffusing the Knowledge and facilitating the general Introduction of useful Mechanical Inventions and Improvements, and for the teaching by courses of Philosophical Lectures and Experiments, the application of Science to the Common Purposes of Life".[5]

The first Professor and Public Lecturer in Experimental Philosophy, Mechanics and Chemistry was Dr Thomas Garnett, whom Rumford poached from the newly founded Andersonian Institute in Glasgow. Despite Garnett's first lectures being a great success, his salary was frozen, he was not allowed to practise as a doctor, and Humphry Davy was appointed as his assistant, so he resigned.[5] Humphry Davy was an even greater success, as was his assistant and successor Michael Faraday. Davy's immediate successor was William Thomas Brande.

Thus the Institution has had an instrumental role in the advancement of science since its founding. Notable scientists who have worked there include Sir Humphry Davy (who discovered sodium and potassium), Michael Faraday, James Dewar, Sir William Henry Bragg and Sir William Lawrence Bragg (who jointly won the Nobel prize for their work on x-ray diffraction), Max Perutz, John Kendrew, Antony Hewish, and George Porter.

In the 19th century, Faraday[6] carried out much of the research which laid the groundwork for the practical exploitation of electricity at the Royal Institution. In total fifteen scientists attached to the Royal Institution have won Nobel Prizes. Ten chemical elements including sodium were discovered there; the electric generator was devised at the Institution, and much of the early work on the atomic structure of crystals was carried out within it.

Since 1799, the Royal Institution has had fifteen presidents and one acting president.[9]

The leadership of the Royal Institution has had various titles:

The position was abolished in 2010.[10] The Institution's last director was Susan Greenfield.

Sarah Harper, Professor of Gerontology at the University of Oxford, was announced as the new Director of the Ri in April 2017[11] and resigned in September 2017.[12]

In 1952, Edward Andrade was forced to resign following a complicated controversy over the management of the Royal Institution and his powers as director, involving a power struggle with Alexander Rankine who was secretary. Following various resignations and general meetings of members, Andrade was awarded £7,000 by arbitration: the arbitrators blamed the problems on "a lack of clear definition of roles ... an outdated constitution, and the inability of the protagonists to compromise". Andrade launched a lawsuit to set the arbitration aside, which he lost.[13]

From 1998 to 8 January 2010, the director of the Royal Institution was Baroness Susan Greenfield, but following a review,[14] the position was abolished for being "no longer affordable".[10] The Royal Institution had found itself in a financial crisis following a £22 million development programme led by Greenfield, which included refurbishment of the institution's main Albemarle Street building, and the addition of a restaurant and bar with an aim to turn the venue into a "Groucho club for science". The project ended £3 million in debt.[10][15]

Greenfield subsequently announced that she would be suing for discrimination.[16] The RI's official statement stated it would "continue to deliver its main charitable objectives under the direction of chief executive officer, Chris Rofe and a talented senior team including , the Director of the Davy-Faraday Research Laboratory, Dr Gail Cardew, the Head of Programmes and Professor Frank James, Head of Collections and Heritage."[17] Baroness Greenfield later dropped the discrimination case.[18] 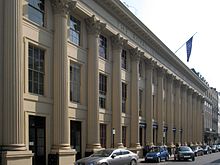 The exterior of the Royal Institution today

Today the Royal Institution is committed to "diffusing science for the common purposes of life".[19] Membership is open to all, with no nomination procedure or academic requirements, on payment of an annual subscription.

The Institution's patrons and trustees include:

In February 2018, the institution appointed Dr Shaun Fitzgerald FREng as director.[21] In July 2018, the institution announced a new five-year strategy [22] running from October 2018 to September 2023. The strategy,[23] which sets out to double the charity's size, involves "plans for new research, development of a new national science club and open forum public policy debates". One new venture will be a Research Centre for Science and Culture, working with other academic groups, this "will investigate historical and contemporary examples of the relationship between science and culture".

The institution's palatial home has been greatly enlarged and redeveloped since 1799, and is a Grade I listed building.[24][25] The structure's last refurbishment was a £22 million project completed in 2008, intended to create a "science salon" for the public. As well as the famous Lecture Theatre, the building contains several function rooms, modern research facilities and a public café. The trustees were considering selling the building in an effort to recoup the organisation's debts, which amounted to £7 million.[26] In 2013 The Ri received an anonymous donation of £4.4m[27] and as of January 2016, the Ri is now debt-free.

The Institution (today abbreviated as the Ri) has a substantial public science programme and science for schools programme, holding over one hundred events per year on a wide variety of topics. The Christmas Lectures continue today as a series of three televised lectures aimed at children. The Friday Evening Discourses are monthly lectures given by eminent scientists, each limited to exactly one hour, a tradition started by Faraday. There is an annual members' ballot[28] for tickets to the Christmas Lectures but all other events are open to the public. Discounts or free tickets are available to Ri Patrons and Members. Many other events and lectures are held both at Albemarle Street and at other venues around the country.

Scientific research headed by Professor Quentin Pankhurst[29] continues to be done under the auspices of the Davy-Faraday Research Laboratory (DFRL), and indeed this is considered to be one of the UK's most notable labs in nano-science.[30]

In May 2015, The Royal Institution was host to the historic unveiling of the , created by Dr Andrew Deonarine.[31]

In November 2015 a new membership scheme was launched and Fellows of the Ri were abolished. The new scheme includes the categories Member, Under 26 and Ri Young Member.[32] A Patrons scheme has also been introduced for the first time.

Despite its noble history, the Royal Institution has now become a mixed tenancy office building that hosts conferences, weddings and events[34] in order to pay its bills. In 2015 it sold part of its historic collection of manuscripts to raise funds.[35][36]

In 2015, a room in the Institution was used in an experiment on moral ethics for the US TV scientific show Braingames.

In 1973 the Royal Institution opened the Faraday Museum, a museum dedicated to Michael Faraday.[37] It is in the main building in Albemarle Street and is open to the public during weekday office hours. The highlight of the exhibition is Faraday's original 1850s laboratory (not a reconstruction as often cited). Opposite this lab is the current state-of-the-art nanotechnology lab. Other exhibits include the discoveries, people and activities of the Royal Institution.