The original Adelaide Hospital was built in 1840 at the eastern end of North Terrace, Adelaide, with its first building superseded in 1856 and many alterations and additions over the following 175 years. It was prefixed by the "Royal" in 1939. In 2017 it was replaced by the new hospital, sometimes referred to as nRAH or NRAH, built at the western end of North Terrace and at the time the most expensive building ever built in Australia, at A$2.3 billion in construction and equipment costs. The redevelopment on the site of the old RAH is known as Lot Fourteen. 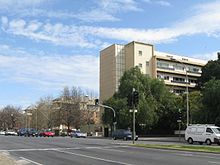 The East Wing of the old RAH

Colonel Light had originally envisaged the hospital in the Eastern parklands.[2]

On 15 July 1840 Lieutenant-Colonel George Gawler, then governor of South Australia, laid the foundation stone for the Adelaide Hospital, which is regarded as the hospital's foundation day, although the first patients were only admitted in January or February of the following year. It was located in the Adelaide Park Lands on the north side of North Terrace, east of Frome Road.[3][4]

In 1856, around the time of the establishment of the Adelaide Botanic Garden to the east, a second building was completed on the site, and the original hospital was used to house patients from the nearby Adelaide Lunatic Asylum, which was sold off to the Botanic Garden.[3][5]

In 1891 the hospital opened its first operating theatre, with rows of raised seating to enable students and others to witness operations. In 1899, only four years after x-ray was discovered, an x-ray facility was opened,[3] by 1939 boasting an extensive X-ray department for the treatment of cancer.[6] The hospital installed its first telephone system in 1901 and performed its first blood transfusion in 1925.[3]

The hospital was officially proclaimed "Royal" on 2 November 1939, at this time the largest general hospital in Australia, and included a modern dental hospital It also functioned as a teaching hospital for medical and dental students, in conjunction with the University of Adelaide[6] (a partnership which has continued to the present day).

The old hospital morgue still stands in the Botanic Gardens.[3]

The old RAH included an advanced burns unit, the Adult Burn Centre, led by 2016 SA Australian of the Year, John Greenwood AM[7] and in 2009 became the only burns unit to be verified by the American Burn Association outside of North America.[8]

The Royal Adelaide Hospital was and still is the only provider of hyperbaric oxygen therapy in South Australia.[9] Its Hyperbaric Medical Unit (HMU) opened in 1985.[9][10] The principal treatment equipment as of 2013 was a pair of twin-lock, multi-place hyperbaric chambers. One of these chambers was the first rectangular steel chamber in Australia.[11][12]

After the completion of the new building in 2017, a phased move to the new premises took place, and the old site was designated Lot Fourteen, with various plans mooted regarding its redevelopment. [13] 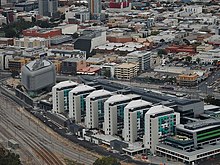 The new RAH and SAHMRI buildings in the emerging BioMed City being constructed over former railyards.

The new Royal Adelaide Hospital (nRAH) is located on a 10 hectares (25 acres) former railyards site within the Adelaide Park Lands. It is situated on the north side of North Terrace and west of Morphett Street.[14] Starting construction in 2011, it cost more than A$2 billion, making it one of the most expensive buildings ever built.[15] The contractor was a joint venture of Hansen Yuncken and Leighton Contractors.[16] The new Royal Adelaide Hospital (nRAH) was completed in 2017, and the move from the old hospital into the new site was completed over four days, 4–7 September.[17]

More than 6,000 staff are expected to work at the hospital,[14] and all rooms are single patient suites with private bathroom facilities. There are 40 operating theatres, each measuring 65m2.[18] The nRAH is technologically advanced, with a fleet of automated robotic vehicles to help move supplies, meals and equipment around the hospital, and a tailor-made patient electronic medical record (EMR).[19]

The hospital was designed to achieve a 50% reduction in greenhouse gas emissions compared to equivalent hospitals. A co-generation system uses waste heat from energy generators for the domestic hot water system. Orientation of the buildings is optimised to minimise solar thermal loads, with extensive daylight penetration to reduce artificial lighting requirements. Rainwater and stormwater harvesting is used to offset potable water requirements, along with extensive use of water sensitive landscaping and a water efficient thermal plant.[19]

The new hospital was initially to be renamed "Marjorie Jackson-Nelson Hospital" after the former Governor of South Australia, however, in 2009 the RAH name was retained after public opposition and at the former governor's request.[20]

The new RAH forms the largest part of Adelaide's emerging biomedical precinct called . Other recently completed facilities in the precinct include the South Australian Health and Medical Research Institute (SAHMRI), the University of Adelaide Health and Medical Sciences building, the University of South Australia's Health Innovation Building, and the state's Dental Hospital.[21][22][23] SAHMRI is building a $300 million second facility due to be completed by 2022 to house the with Australia's first proton therapy unit.[24] There are also plans for the Women's and Children's Hospital to be relocated to the precinct adjacent the RAH by 2024.[25]