Ruthven Mansions, an apartment building on 21 Pulteney Street, built in 1911.

Pulteney Street was named after Admiral Sir Pulteney Malcolm on 23 May 1837, at the behest of Governor Hindmarsh.[2][3] On the south east corner of Pulteney and Rundle streets was the elegant York Hotel, later Grand Central Hotel,[4] which was demolished to make way for a multi-storey car park. 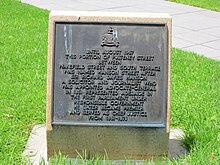 The plaque commemorating the former Hanson Street, which is now the southern section of Pulteney Street

The southern portion of Pulteney Street, between Wakefield Street and South Terrace, was originally named Hanson Street, after Richard Hanson (later Sir Richard), a London solicitor and journalist, and founding member of the South Australian Literary Society in August 1834. In 1846, nearly a decade after the naming, Hanson moved to South Australia, where he served as Premier (1857-1860), Chief Justice of the Supreme Court (from 1861) and as acting Governor (1872-1873). Hanson Street was subsumed into the expanded Pulteney Street in August 1967. The Hanson Street Memorial in Hurtle Square maintains the commemoration of Sir Richard.

Pulteney Street is the only one of the city centre's major north-south thoroughfares that does not continue north from North Terrace. This is due to Sir John Langdon Bonython[5] donating over £50,000 to the University of Adelaide for it to build its Great Hall, (named Bonython Hall). One of the conditions of Bonython's bequest was that the hall be built on North Terrace opposite Pulteney Street, thus ensuring that the thoroughfare could not continue north through the parklands and divide the already small campus.[6][7][8]