Interval immediately following the end of a war
For the 2006 M. Ward album, see Post-War. For the 2005 Tony Judt book, see Postwar (book). 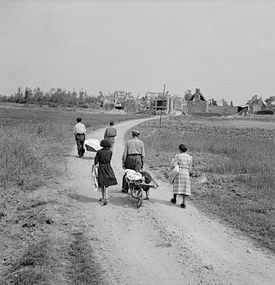 A French family returns to their village, Buron, northwest of Caen, which was completely destroyed during fighting, July 18, 1944

In Western usage, the phrase post-war era (or postwar era) usually refers to the time since the end of World War II, even though many nations involved in this war have been involved in other wars since.

The term "post-war" can have different meanings in different countries and refer to a period determined by local considerations based on the effect of the war there. In Britain, "post-war" refers to the period from the election of Clement Attlee in 1945 to that of Margaret Thatcher in 1979, a period of so-called post-war consensus, while it may also refer to a shorter period, ending in 1960 or shortly after and corresponding to the 1950s era, hence 1945–1960.[1][2][3]

Considering the post-war era as equivalent to the Cold War era, post-war sometimes includes the 1980s, putting the end at 26 December 1991, with the Dissolution of the Soviet Union.[4][5] The 1990s and the 21st century are rarely considered to be part of the post-war era.