The North–South Motorway (route M2) is an incomplete planned motorway traversing the inner western suburbs of Adelaide from Waterloo Corner in the north to Bedford Park in the south. Progressively constructed in stages since 2010, once complete it will replace the adjacent South Road as Adelaide's main north-south roadway and form the central section of the North–South Corridor, being flanked north and south by the Northern Expressway and Southern Expressway, respectively.

As of March 2021, approximately 24.1 kilometres (15.0 mi) of the motorway has been completed with the remaining 10.5 kilometres (6.5 mi) currently under investigation.

In 2010 the Australian Government, through the Nation Building Program project, committed $500 million and the South Australian Government committed $432 million to the North–South Corridor over five years. This funding allocation recognised that South Road is the only continuous link between the northern and southern suburbs as well as the spine connecting Adelaide's major inter-modal transport hubs – Adelaide Airport, , Port Adelaide and Outer Harbor.[2]

In May 2015 a government strategy paper envisioned the entire non-stop north–south road corridor would be completed by 2025, including "an upgraded South Road".[3] It stated the planned "non-stop motorway" would "cater for the unimpeded flow of longer distance northbound and southbound trips" and would not include "at-grade traffic signals, intersections, junctions or property accesses which cause vehicles to slow down or stop".[3]

The motorway is divided into sections for the purposes of construction. As of March 2021, four sections are complete and one is under investigation. From north to south the sections are:

On 14 September 2015, the Premier of South Australia, Jay Weatherill and Prime Minister of Australia Tony Abbott announced that the road component of the project would start construction in early 2016. The federal government would provide A$788M towards an expected total cost of A$985M. The project was reduced to three lanes each way with two intermediate interchanges; the railway component was also removed, though a corridor has been reserved on the western side of the motorway for future use.[7] The road is not subject to direct tolls, but South Australia will become a testing ground for a "network fee" which involves charging trucks based on road use and impact in place of high registration fees.[8]

The first new bridge to open to traffic was the bridge over the new motorway at the Waterloo Corner interchange. This bridge was opened on 26 March 2019 to provide the new access route into St Kilda, replacing several roads that had been cut by the motorway. The last road to be closed in the area was St Kilda Road, three days after the new bridge opened.[9] The next new bridges were the twin bridges over the Port River Expressway at the southern interchange. They replaced the original Craig Gilbert Bridge which was closed and demolished in May 2019.[10] A temporary off ramp from South Road to Salisbury Highway was provided which used the new southbound bridge and the future Port River Expressway to South Road on ramp. In July 2019, the bridge for the end-state off ramp opened to traffic, carrying north->east traffic over the Northern Connector.[11] The bridge over the expressway at Bolivar Road opened for access into the Bolivar Waste Water Treatment Plant about a week before Christmas 2019. The final alignment of the northbound carriageway of Port Wakefield Road at the northern interchange opened at about the same time, over a new bridge that passes over the southbound on-ramp from Port Wakefield Road. The whole road opened to traffic on 7 March 2020.[12]

Lendlease was awarded the contract. The announcement included support for other sectors of the South Australian economy, with a requirement that 7500 tonnes of steel would be sourced from Arrium and at least half of the workers hired from the northern suburbs of Adelaide where other industries were reducing workforce - notably Holden ceased local production of cars in 2017.[13]

In November 2016, it was announced that the majority of the road surface would be concrete, rather than asphalt as used on most roads in South Australia. This was expected to have a slightly higher up-front cost, but significantly lower maintenance costs over 30 years.[14]

Major construction was announced to have started on 6 December 2016, with completion anticipated in December 2019.[15] There were a total of nine bridges required to be constructed. The Southern Interchange required three bridges; The Bolivar and Waterloo Corner Interchanges each required a bridge over the expressway; the northern interchange required a new bridge for the northbound carriageway of Port Wakefield Road to cross the southbound on-ramp; the motorway crosses North Arm Creek, Dry Creek and the Little Para River.[16]

The project was divided into six zones. Zone 1 containing the northern interchange was let to McMahon Services. Zone 2 contained the Waterloo Corner interchange, and was let to LR&M Constructions. Zone 3 contained the Bolivar interchange and bridge over the Little Para River and was subcontracted to Catcon. Zone 4 was the Bolivar intersection with Port Wakefield Road, let to S.E.M. Group. Zone 5 crossed Dry Creek and the salt pans. Zone six was the southern interchange. Zones 5 and 6 were both managed directly by Lendlease. The shared use path along the eastern side of the road was constructed by Intract Indigenous Contractors[16]:47 and is named Tapa Martinthi Yala.[17]

The raw materials to make the concrete for the road were be supplied by Adelaide Brighton Cement, and mixed on-site. The road was reinforced with steel from Liberty OneSteel and asphalt was supplied by Boral.[18]

The South Road Superway is an elevated motorway in the northern suburbs of the South Australian capital city of Adelaide.[1] The 2.8 km elevated roadway rises just north of Taminga Street, Regency Park and goes over Days Road, before access ramps at Grand Junction Road, then continues over Cormack Road and the Dry Creek railway line to join the intersection of the Port River Expressway and Salisbury Highway where the motorway continues northwards. In 2009, an announcement was made to build an elevated roadway above South Road from just north of Regency Road to the end of South Road where it joins to the Port River Expressway and Salisbury Highway. The elevated roadway was constructed at a cost of A$812 million and opened 13 March 2014. At the time, the Superway was the biggest single investment in a road project in South Australia's history.[19] The Superway delivered a 4.8 kilometre section of freeway grade road, including a 2.8 kilometre elevated roadway, from the Port River Expressway to Regency Road. Along the way, it passes over the Dry Creek-Port Adelaide railway line, Cormack Road, Grand Junction Road and , with exits at Grand Junction Road and Days Road. 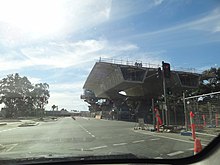 After construction of the South Road Superway and the Torrens-to-Torrens lowered motorway, this 1.8 kilometres (1.1 mi) section of road was left with two traffic light intersections (including Regency Road), a controlled pedestrian crossing, and access to local side streets. It was reported in May 2017 that completion of this section would cost $400 million, with construction to begin at the start of 2019 and be completed by the middle of 2022. This would complete 47 km of freeway from Gawler to the River Torrens. The state government said it was seeking 85% of the cost to be funded by the federal government, which had not committed to the spend.[24] Completion of this section was committed by the state and federal governments on 1 May 2018. The announcement stated that the cost would be A$354m but did not state an expected completion date. It will include an overpass of Regency Road and a pedestrian and cycling connection over the freeway near Pym Street. The motorway portion will be three lanes each way with an additional two lanes each way on the surface road to provide access to community and businesses.[25]

The contract for design and construction of the 1.8 kilometres (1.1 mi) motorway segment with three lanes in each direction, plus two lanes each way providing access to the surrounding community and businesses, was awarded on 5 July 2019 to a consortium of McConnell Dowell, Mott MacDonald and Arup Group. All three members have been involved in other major infrastructure projects in South Australia, notably the Oaklands railway station grade separation. Main construction began in late 2019.[26] The overpass opened at reduced speeds to southbound traffic on 26 March 2021 and to northbound traffic on 30 March;[27] full completion is expected by the end of 2021.[28] 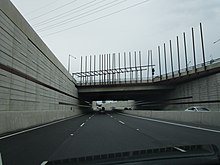 Travelling southbound under the Port Road bridge in the lowered motorway, September 2018

In 2013 the State Labor government in partnership with the Federal Labor government announced an upgrade to approximately 4 km of road between Torrens Road and the River Torrens. The upgrade would feature a new, lowered road under Grange and Port Roads to provide a non-stop route through the area for north–south traffic and reduce delays to east-west travel, a parallel surface road along the length of the lowered road to connect the majority of local roads and arterial roads to South Road and a rail overpass of South Road for the Outer Harbor line. Construction started in 2015, with the project expected to be completed by the end of 2018.[29][30]

The project scope was extended in December 2015 to include an underpass of Torrens Road, at no additional project cost or time.[31] The lowered motorway opened to traffic on 29 September 2018.[32][33][34]

Before the motorway, traffic congestion in this section is presently mitigated by the Gallipoli Underpass at Anzac Highway and nearby Glenelg Tram Overpass (both completed in 2009), and the Emerson Overpass over Cross Road and Seaford railway line (completed in 1985). These measures are only considered interim solutions and will be upgraded prior to or concurrently with the rest of this section of road.[35]:54 In fact, the increasing frequency of commuter trains has resulted in growing bottlenecks at the Emerson Overpass as queues on the exit ramps to Cross Road can extend into the through lanes on South Road; the rail crossing can be closed for up to 20 minutes in the peak hour.[35]:16

In August 2018, the possibility was raised that this section could be completed by tunnelling under the existing alignment.[36] By 2020 the State Government was pursuing two options to complete this section: an open motorway formed of at-grade, elevated and lowered portions reminiscent of completed sections of the North–South Motorway, with short cut-and-cover tunnels where necessary; and a "hybrid option" with an open motorway between James Congdon Drive and Edward Street, Clarence Gardens, flanked by longer bored tunnels at the northern and southern ends.[37] Geotechnical works to investigate both options commenced in August 2020.[38] The 2020 state budget announced the preferred approach which would consist of two stages: Stage 1 would deliver a 4.3 km deep-bored tunnel and a 1 km lowered motorway from Darlington to Anzac Highway; Stage 2 would deliver a 2 km deep-bored tunnel from Sir Donald Bradman Drive to West Thebarton Road, with surface motorway and underpasses making up the remaining portions of Stage 2.[39] Current estimates place the project cost at $8.9 billion;[39] main construction is not expected to start until at least 2024.[37]