Murray Bridge (formerly Mobilong and Edwards Crossing) is a city in the Australian state of South Australia, located 76 kilometres (47 mi) east-southeast of the state's capital city, Adelaide, and 77 kilometres (48 mi) north of the town of Meningie. The city had an urban population of approximately 18,779 as at June 2018[1] making it the fifth most populous urban area in the state after Adelaide, Mount Gambier, Victor Harbor - Goolwa and Whyalla.

The city was originally known as Mobilong and later as Edwards Crossing, before being renamed as Murray Bridge in 1924,[4][5] deriving its name from the road and railway crossings over the Murray River. The city is situated on the Princes Highway, the main road transport link between Adelaide and Melbourne. 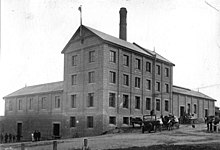 Murray Bridge is in the traditional lands of the Ngarrindjeri people, who refer to Murray Bridge as Pomberuk. The first European explorer was Charles Sturt who camped there on 8 February 1830.

The first road bridge across the lower Murray was known as The Murray Bridge and completed at Edwards's Crossing in 1879.[6] The bridge also became a shared road and rail bridge in 1886 until the separate rail bridge was completed in 1925.[7] The bridge was designed for 1,067 mm (3 ft 6 in)[8] rail track gauge though in actuality, only 1,600 mm (5 ft 3 in) gauge trains ever used it.

The District Council of Mobilong was established in 1884 bringing local government to the township, then known as Mobilong, and the surrounding land within the Hundred of Mobilong. By 1923, the council had absorbed the southern two thirds of the neighbouring Hundred of Burdett across the river, the Hundred of Ettrick further east, and part of the Hundred of Brinkley to the south. The Mobilong township by then had its own ward. The township seceded from Mobilong council in 1924, calling itself the Corporate Town of Murray Bridge, effectively renaming the township.[4] In 1977 the two local councils recombined as the District Council of Murray Bridge.

In 1979 the Swanport Bridge, carrying the South Eastern Freeway across the Murray River was completed 5 kilometres (3 mi) downstream, removing most through traffic from the historic Murray Bridge.

Murray Bridge contains a number of heritage-listed sites, including the , listed on the South Australian Heritage Register.[9]

In the 2006 Census, 10.4% of the population were born overseas, and 4.5% were Indigenous Australians. The median weekly household income was A$639 per week, compared with $924 in Adelaide. 13.3% of the population identified themselves as Lutheran, while a higher 24.7% identified with no religion.[12]

In 1924 the Murray Bridge rowing team was chosen to represent Australia at the Paris Olympics. The Murray Cods as they were known won the Australian Eight Oared Championships (the King's Cup) and were invited to compete in a test race at Port Adelaide between South Australia, Western Australia, Tasmania and Victoria. Although accustomed to rowing over 3 miles, the Murray Cods were able to defeat the other crews on the 1 mile and 420 yards (2 km) course. The story of their fund-raising and exploits in Paris are detailed on the Australian Rowing History website.[13]

Murray Bridge is home to "The Bunyip", a mechanical representation of the legendary water monster, located on Sturt Reserve. Many South Australian children fondly remember their first visit to the Bunyip, putting a coin in the machine and watching the Bunyip emerge from its watery cage complete with shrieking sound effects.

Murray Bridge is also home to the River Murray Football League, which plays Australian rules football. The league consists of the Murray Bridge-based clubs of Ramblers and Imperials and the district teams of Mypolonga, Mannum, Tailem Bend, Jervois and Meningie.

In 2005 the city's golf course, , held the State's premier regional junior team event, the Brett Ogle Cup (named after the Australian Professional golfer Brett Ogle). The home team went undefeated and qualified for the state final, losing narrowly. The team had not previously experienced such success; junior golf in the region has since obtained a higher profile.

Another sporting association in Murray Bridge is the Murray Bridge Amateur Swim Club (The Cods) which competes in meets with other clubs, as well as Country Championships (a large meet for all of the rural South Australian swim clubs) and state and national championships.

Murray Bridge is also the home of the Murray Bridge Racing Club, Murray Bridge & District Table Tennis Association, and holds the 24-hour Australian International Pedal Prix race annually in September. Murray Bridge Lutheran Tennis Club plays hard court tennis on their home courts based at Christian Reserve. Hard court tennis is hosted by various clubs throughout the community, including Jervois, Brinkley, Mannum, Mypolonga and Tailem Bend as well as clubs within the township. Hard court tennis is played on both Friday nights and Saturday mornings. There are both Junior and senior divisions. Friday night tennis offers a social alternative, often offering barbecues and after-game drinks. Lawn tennis is played at Sturt Reserve on Saturday mornings and afternoons from October to February, and is organised by the Murray Bridge Lawn Tennis Association.

Murray Bridge is also known for its basketball, having won numerous State Country Championships and many of its young players going on to represent South Australia in the National Championships.

Murray Bridge is also home to the Murray Bridge Speedway which has been in operation since 1958. Located on the eastern side of the River, the speedway is a 360 metres (390 yd) long dirt track racing venue that caters to both motorcycle speedway and car racing, hosting numerous Australian and South Australian championships during its existence. On 12 November 2011 the speedway hosted its first ever World Championship event when it will host the FIM 2011 World Sidecar Speedway Championship with Murray Bridge's own Jesse Headland winning the title as passenger to NSW based rider Darrin Treloar. Headland was the winner of the 2010 Championship in England with his father Mick Headland.[14]

Murray Bridge has a semi-arid climate with warm to hot summers and mild winters, bordering on a Mediterranean climate. The highest recorded temperature of 46.6 °C (115.9 °F) was reached on 28 January 2009 during the early 2009 southeastern Australia heat wave–making it one of the hottest temperatures ever recorded in a South Australian metropolitan area.

Most of Murray Bridge's retail and dining facilities are located on and in close proximity to Bridge Street. The majority contained within two main shopping centres, Murray Bridge Green and Murray Bridge Marketplace.

Murray Bridge Green opened in 1976 as a Woolworths supermarket and a small number of additional stores. The centre was extended in 2001 and included a Target Country. A new addition to the original shopping complex was completed in 2015, which included a second (and larger) Coles, and a new Target replacing Target Country, which the site made way for a Cheap as Chips discount store. After 42 years of trading, the Woolworths store closed in May 2018.

Murray Bridge Marketplace was opened in November 2011 and contains the city's second Woolworths supermarket (now only Woolworths after the original store closed), a Big W department store, Priceline, Best & Less, Reject Shop, 45 specialty stores, a food court and the public library with undercover parking for over 900 cars. There was a previous Woolworths store that was located in Bridge Street on the corner of Sixth Street opposite the then Town Hall and Court House. This store opened in either late 1969 or 1970 and was later replaced by the 1976 store at the Murray Bridge Green located on Swamport Road and Standen Street.

Discount supermarket Aldi opened further west from the Murray Bridge CBD, on the corner of Adelaide Road and Thomas Street in late 2018.

Murray Bridge is home to The Murray Valley Standard newspaper, whose first edition was printed and distributed on 23 November 1934. It is now published on Tuesdays and Thursdays.[21] Dozens of other regional newspapers, publications and catalogues are also printed at the former Rural Press facility on Adelaide Road.

The Rail Bridge over the Murray River at sunset.

Murray Bridge railway station is on the Adelaide to Wolseley railway line, the South Australian part of the Melbourne–Adelaide rail corridor. It is served by Great Southern Rail's twice weekly passenger service The Overland operating between Adelaide Parklands Terminal and Southern Cross railway station in Melbourne.[24]

The is a historic area that includes the railway station and wharf area, the original bridge constructed in 1879 and converted for dual road and rail use in 1886. It returned to being only a road bridge in 1925 when a separate rail bridge (also included in the heritage precinct) opened to handle heavier trains. The railway now passes under the road approach to the bridge through the Murray Bridge Tunnel, a short cut-and-cover tunnel built as part of works for the new rail bridge in 1925.[9]

Both bridges cross the Murray River between Murray Bridge and Murray Bridge East. The road bridge was part of the Princes Highway from 1935 until 1979. Murray Bridge is now connected by road to Adelaide via the South Eastern Freeway which leads to a newer crossing of the river further south on the Swanport Bridge built in 1979. State road route B35 connects from the north of the town towards Palmer and the central Adelaide Hills and route B36 leads towards Mannum, other river towns and the Sturt Highway.

Murray Bridge Airport is nine kilometres north of the town, but does not have any scheduled services.

The Lavender Federation Trail is a long-distance walking trail (350 kilometres or 220 miles) that extends from Murray Bridge along the eastern Mount Lofty Ranges to Clare.