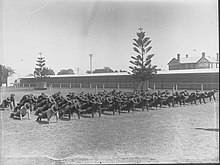 After years of using grounds at the East Parklands ("The Old Adelaide Racecourse", later known as Victoria Park) rented from the Adelaide City Council, a group which became the South Australian Jockey Club began using a racecourse ("Thebarton Racecourse" or "The Butchers' Course") at present-day Mile End formed on grazing land owned by E. M. Bagot and Gabriel Bennett[1] near the River Torrens from 1859 to 1869, when the course was abandoned due to insufficient patronage. After five or six years of existence in name only, the SAJC acquired, thanks to the generosity of Sir Thomas Elder, its own freehold property at Morphettville ("The Bay of Biscay Course") and held its first meeting there on 3 January 1876.[2] A breakaway group, which became the Adelaide Racing Club, continued to hold race meetings at "The Old Racecourse".

In 2008, firstly Victoria Park, and then in 2009 Cheltenham Park were discontinued as racing facilities, and now Adelaide race meetings are conducted only at Morphettville.

The course proper at Morphettville is a long, flat course with a circumference of 2,307 metres (7,569 ft). The track is 32 metres (105 ft) wide and features wide turns with a camber of 4%. A retractable winning post with hydraulics enables the SAJC to alternate the running of races with minimal damage to both tracks, especially with races taking place mid week and increased racing through the winter months. It was installed in 2009, and is a world first.[citation needed]

The Morphettville Racecourse Wetland was a joint initiative of the Patawalonga Catchment Water Management Board and the South Australian Jockey Club. It was constructed by the Board and the Jockey Club during 2001 and 2002.[3] The wetland covers an area of 3.5 hectares, in the middle of the racecourse on the corner of Anzac Highway and Morphett Road. Costing $2.4 million to construct, it includes 100,000 plants, with the soil excavated being used to raise the level of the racecourse track.[3]

View of the main grandstand

The catchment area for the wetland includes stormwater flow from two drains in Bray Street, south of the racecourse. Water enters a sediment pond where floating litter is collected in a net and large materials settle out. The water is then piped into the wetland, where it travels through a series of deep and shallow marshes. An aquifer storage and recovery system (ASR) has been constructed at the wetland. The water flowing out of the wetland is ideal for irrigation as it has very low salinity. During winter months, water is captured and pumped into a tertiary limestone aquifer below the racecourse. During the summer months, the water in the aquifer is recovered and used for irrigation. Up to 600 megalitres of water a year is recharged into the aquifer, which exceeds the amount required to irrigate the racecourse.[3]

The following is a list of Group races which are run at Morphettville Racecourse.