Hindmarsh Stadium (currently known as Coopers Stadium due to sponsorship from Adelaide-based company Coopers Brewery[3]) is a multi-purpose stadium in Hindmarsh, an inner western suburb of Adelaide, South Australia. It is the home of the Australian A-League team, Adelaide United.

Built in 1960, the stadium stands on the site that was once Hindmarsh Oval which housed the West Torrens Football Club of the SANFL from 1905 until 1921, when the team moved to nearby Thebarton Oval which would remain its home until 1989. During World War I the Patriotic Football League, a group of SANFL clubs that wanted to continue playing football during the war played many games at the venue. The 1916 Patriotic Football League Grand Final was held at the ground between Port Adelaide and West Torrens with Port Adelaide winning 7.11 (53) to 1.13 (19).[4]

The Soccer Association of South Australia owned land on a former brick pit on Torrens Road at Brompton named Rowley Park which was located only 5 km from the city, and the original plan was for the land to be the home of Soccer in SA as the site formed a natural bowl. However, the Soccer Association had received negative press regarding its failure to grow grass on the site. Rowley Park also had a tendency to flood during winter as the bottom of "The Brick Pit" was below the level of the water table which made playing soccer virtually impossible. The land was eventually leased to a group of speedway drivers and would become the famous Rowley Park Speedway which ran from December 1949 until it closed in April 1979. The land was eventually sold and is now the Kym Bonython housing estate, named for the speedway's long time promoter Kym Bonython.

When it became obvious to the Soccer Association that Rowley Park would be unsuitable as a soccer venue they obtained a lease on Hindmarsh Oval from the Hindmarsh Council. The old Hindmarsh Oval was developed over the years into a rectangular stadium capable of holding 15,000 with a single tier grandstand built in 1960 that held approximately 2,000 while 6 light towers for night games (plus another 8 smaller light towers on the grandstand roof) were installed during the mid-1970s. Other than the grandstand, the ground was all terracing surrounding the playing surface. This changed in 1996 when seats were installed on the eastern side of the ground.

In 1986 Hindmarsh stadium hosted the first leg of the NSL Grand Final between Adelaide City and Sydney Olympic. Unfortunately for Adelaide fans Olympic won 1-0. Adelaide would go on to win the 2nd leg in Sydney 3-1 and become NSL Champions. Hindmarsh again hosted the NSL Grand Final (this time a single game) in 1994-95 when Adelaide City faced the Mark Viduka led Melbourne Knights. In front of a packed house of over 16,000 the Knights defeated the Zebras 2-0.

As soccer was generally played to smaller crowds during the 1970s and 80's, Hindmarsh became a regular host of the Socceroos in some of their international matches, with Adelaide-based players such as Robert Zabica, Alex Tobin, and the Vidmar brothers Aurelio and Tony all playing prominent roles.

Hindmarsh Stadium not only hosted soccer matches but also hosted Rugby Union and Rugby league. In 1992 the New Zealand All Blacks played an exhibition game against a South Australian 'Select' team which included former Wallabies Lock and current day author/media personality Peter FitzSimons. The All Blacks, including goal kicking Stand-off Grant Fox who would retire the following year as the All Blacks highest ever point scorer, ran out easy winners while FitzSimons, playing up to the crowd by humorously claiming innocence, was sent off midway through the second half after numerous infringements. At the time this made FitzSimons the only Wallaby (although his international career had finished by the time of the match) to ever be sent off in a match against the All Blacks.

In 1996 as part of the rebuilding of the venue before the 2000 Summer Olympic Games, the original single tier grandstand with its wooden bench seats was demolished and replaced by the current two tier structure. The terracing on the opposite wing was also removed and replaced by seating. When the ground was rebuilt before the Olympics only the new grandstand would remain in place. 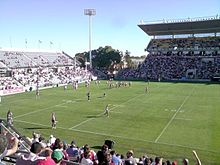 In 1998 the short lived National Rugby League team the Adelaide Rams used Hindmarsh for their last 4 home games of the 1998 NRL season. The Rams début at the venue was a success when they thumped the Balmain Tigers 52-0 in front of 7,351 fans. The Rams would end up 2-2 at Hindmarsh after defeating the Auckland Warriors, but losing to Manly-Warringah and North Sydney. The Rams were to continue using Hindmarsh as their home ground in the 1999 NRL season giving them a rectangular venue suited to league rather than an oval as was their previous home, the Adelaide Oval. However the team was wound up by owners News Ltd only weeks before the start of the 1999 season.

Hindmarsh Stadium was one of the venues chosen to host preliminary matches for the men's soccer during the 2000 Olympics held in Sydney. This saw the stadium receive almost a complete rebuild which brought it to its present status. The field was lengthened from 110 to 120 metres to be able to also accommodate both rugby league and rugby union which used longer field dimensions (though the minimum field length of a union field including in-goal areas is actually 120 metres so shorter than desirable in-goals are required), the six old light towers were replaced with four television standard ones (one in each corner with lights also on the front edge of the grandstand roof) and the former terracing was now all seated, uncovered stands with only the grandstand built in the mid-1990s remaining in place. During the Olympics, temporary stands were erected in the corners of the stadium to bring capacity up to 20,000. Hosting matches from Groups A and B, the recorded attendance at Hindmarsh was set at 18,340 when Italy drew 1-1 Nigeria on 19 September 2000.

Other soccer played in the stadium in the past include several international matches, including most of the games played in the 2004 OFC Nations Cup - an event where the Socceroos began their qualifying campaign for the 2006 FIFA World Cup. In 2007 the venue hosted the first two rounds of the Olyroos campaign as they qualified for the 2008 Summer Olympics. With the rise in the sports popularity in Australia, Hindmarsh is rarely used these days by the Socceroos other than for training purposes or matches against lower ranked countries such as those from the Pacific islands. International matches now generally take place at larger capacity venues such as Sydney's 84,000 seat ANZ Stadium, Brisbane's 52,500 seat Suncorp Stadium, or the largest stadium in the Southern Hemisphere, the 100,024 capacity Melbourne Cricket Ground. Though with the redevelopment of the Adelaide Oval to a world class, FIFA compliant 53,583 capacity stadium (50,083 seated), there is renewed speculation that the Socceroos will return to Adelaide for high-profile international matches.

On 15 April 2006 on a Saturday night the stadium hosted its first NRL match since the Rams final home game in 1998 when the Sydney-based Penrith Panthers played that year's NRL Grand Finalist the Melbourne Storm. With 7,017 fans in attendance the Storm ran out easy 40-18 winners with emerging rugby league superstar Greg Inglis scoring 3 tries for Melbourne.[5] It was a home match for the Panthers who brought the game to Adelaide due to renovations being completed at their usual home, Penrith Park in western Sydney.

The Stadium's Record attendance outside of the 2000 Olympic Games is 17,000 at the 2008 AFC Champions League Final Second leg between Adelaide United and Gamba Osaka of Japan. Adelaide lost 2-0, but still became tournament runners up. This remains Adelaide United's record attendance at Hindmarsh. On 3 October 2008 it was announced by the SA Government Minister for Recreation and Sport Michael Wright coach Ricky Stuart, head coach of Sydney-based NRL team the Cronulla-Sutherland Sharks, that the Sharks would play three NRL home games at Hindmarsh over 3 years starting from 2009. The first of those was against the North Queensland Cowboys on 19 April 2009. On a sunny autumn day the Cowboys defeated the Sharks 34-10 in front of 8,547 fans, the record crowd for a rugby league match at Hindmarsh.

Unfortunately for NRL fans in Adelaide it was announced early in the 2010 season that Cronulla had been allowed by the SA Government to pull out of their contract. Cronulla's official reasons were wanting to concentrate on their home fans by not taking home games away from Toyota Stadium. The NRL return to Adelaide in 2010 when another Sydney based club Canterbury-Bankstown Bulldogs played a home game at the Adelaide Oval instead of Hindmarsh against the Melbourne Storm. The Bulldogs had planned to make the Adelaide Oval their 'other' home, returning in 2011, again against the Storm, but this was also abandoned after just two years.[6]

The venue took host to the inaugural FFA cup final on 16 December 2014 which saw Adelaide United face Perth Glory.[7] United were 1-0 victors with an attendance of 16,142.[7]

Panorama of Hindmarsh Stadium from the away end before Adelaide United v Melbourne Victory, October 2016

Hindmarsh Stadium hosted seven games of the 2000 Olympic men's football tournament. The stadium's all-time attendance record of 18,430 was set during the Group A match between Italy and Nigeria.