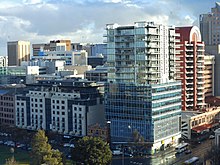 Grenfell Street was named after Pascoe St Leger Grenfell, a British businessman and valued member of the South Australian Church Society. His significant donation of an acre of land on North Terrace was used for the construction of the Holy Trinity Church — one of the first churches built in the city.[3] Raikes Currie was treasurer of the South Australian Church Society, and his name his used for the western continuation of Grenfell Street across King William Street. Grenfell also donated another 40 acres of country land for the use of the church as glebe lands. This land later became the suburb of Trinity Gardens.

The section of the street which runs parallel to Rundle Mall features many retail outlets, as well as the southern entrances of many of the arcades, side-streets, and eateries of the mall. Office buildings and night spots also populate the street. The eastern end is occupied on the south side by Tandanya, a museum of Indigenous Australian art, and on the north side by the East End Markets redevelopment.

Grenfell Street runs from King William Street to East Terrace. It is one of the intermediate–width streets of the Adelaide grid, at 1 1⁄2 chains (99 ft; 30 m) wide.

In July 2012, bus lanes were introduced along the full length of Grenfell Street.[4][5]