For other uses, see .

Flinders University is a public university founded in 1966, which is based in Adelaide, South Australia. Its main campus is located at Bedford Park in Adelaide's inner south, with sites at Victoria Square in the centre of the city,[1] Tonsley,[2] regional South Australia, south-west Victoria and throughout the Northern Territory.

The university is focused on global research and contemporary education through its six colleges of Business, Government and Law[3], Education, Psychology and Social Work[4], Humanities, Arts and Social Sciences[5], Medicine and Public Health[6], Nursing and Health Sciences[7] and Science and Engineering[8].

Research interests include biomedical and clinical sciences, culture and the arts, policy and society, health and human behaviour, molecular science and technology, defence, engineering, water and environment. The university's footprint through central Australia frames its multidisciplinary focus on health education and research in rural and remote areas.

Flinders University is a verdant university and a member of the Innovative Research Universities (IRU) Group.[9] Academically, the university pioneered a cross-disciplinary approach to education,[10] and its faculties of medicine and the humanities are ranked among the nation's top 10.[11]Innovation is embedded in all university programs, supported by the Flinders New Venture Institute, a global entrepreneurship leader[1] located at the University’s high-tech Tonsley campus.

The university is ranked within the world's top 500 institutions in the Academic Ranking of World Universities. In January 2019, Times Higher Education rankings of the world’s top universities ranks Flinders in the 251 – 300th bracket.[12]

Flinders University was named in honour of British navigator Matthew Flinders, who explored and surveyed the South Australian coastline in the early 19th century.

Planning began in 1961. The principal-designate of the new campus, economist and professor Peter Karmel, was adamant that the new campus should operate independently from the North Terrace campus. He hoped that the Bedford Park campus would be free to innovate and not be bound by tradition.[13]

Capital works began in 1962 with a grant of £3.8 million from the Australian Universities Commission. Architect , in conjunction with architectural firm Hassell, McConnell and Partners, designed a new university that, with future expansions, could eventually accommodate up to 6000 students.[13]

Flinders University became a forerunner in a new wave of universities committed to crossing disciplinary boundaries.[14]As foundation vice-chancellor Peter Karmel said 'we want to experiment and experiment bravely’. Traditional academic structures of faculties and departments were replaced by large schools students were drawn together from diverse fields of study. The School of Language and Literature introduced the concept of continuous assessment. Interdisciplinarity became an aspiration, and what was a bold experiment went on to become the norm in Australia.

In 1965, the Australian Labor Party won the state election and Frank Walsh became premier. The ALP wished to break up the University of Adelaide's hegemony over tertiary education in the state, and announced that they intended the Bedford Park campus to be an independent institution.[13]

On 17 March 1966, a bill was passed by state parliament officially creating the Flinders University of South Australia.[15] Although the Labor Party had favoured the name "University of South Australia", academic staff wished that the university be named after a "distinguished but uncontroversial" person. They settled upon British navigator Matthew Flinders, who explored and surveyed the South Australian coastline in 1802. Its coat of arms, designed by a professor in the Fine Arts faculty, includes a reproduction of Flinders' ship Investigator and his journal A Voyage to Terra Australis, open to the page in which Flinders described the coast adjacent the campus site.[13]

Flinders University was opened by Her Majesty Queen Elizabeth, the Queen Mother, on 25 March 1966.[15] Peter Karmel was the first Vice-Chancellor and Sir Mark Mitchell the first Chancellor. The university began classes on 7 March 1966 with a student enrollment of 400.

A significant early initiative was the decision to build the Flinders Medical Centre on land adjacent to the campus and to base the university's Medical School within this new public hospital – the first such integration in Australia. Flinders first accepted undergraduate medical students in 1974, with FMC being opened the following year.[15] 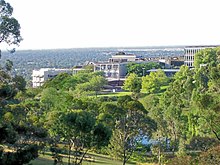 In 1990, the biggest building project on campus since the mid-1970s saw work commence on three new buildings – Law and Commerce; Engineering; and Information Science and Technology. Approval for the establishment of a School of Engineering was given in 1991 and degrees in Electrical and Electronic Engineering[16] and Biomedical Engineering[17] were established shortly afterwards.

In 1991, as part of a restructuring of higher education in South Australia, Flinders merged with the adjacent Sturt Campus of the former South Australian College of Advanced Education.

In 1992 a four-faculty structure was adopted.

Since 2000 the University has established new disciplines in areas including Physiotherapy, Occupational Therapy and more disciplines of Engineering.[19][20]

In 2011, the bacteria genus Flindersiella was named after the university after the strain was found on a tree on campus grounds.[21]

In 2015, the University opened a new campus at Tonsley,[22] the former site of the Mitsubishi Motors Australia plant in Southern Adelaide. This campus houses the University's School of Computer Science, Engineering and Mathematics,[23] along with the Medical Device Research Institute,[24] the Centre for Nanoscale Science and Technology (now known as the )[25] and Flinders technology start-up company Re-Timer.[26]

In 2016, the University celebrated its 50th anniversary with a calendar of public events,[27] and a publication[28] summarising the highlights of the University's history, research, and alumni achievements over the last 50 years.[29] During the year it unveiled the redevelopment of its main campus heart that commenced in 2014. This award-winning Plaza and Hub created a revitalised retail and entertainment precinct including food outlets, various services, a tiered recreational plaza and outside super screen.

On 1 July 2017, the University restructured from a two-tier academic system of four faculties and 14 schools, to a single-tier structure consisting of six colleges.[30]

The University's main campus is in the Adelaide inner southern suburb of Bedford Park, about 12 km south of the Adelaide city centre.[31] The University also has a presence in Victoria Square in the centre of the city,[1] and Tonsley.[2] It also maintains a number of external teaching facilities in regional South Australia, south-west Victoria and the Northern Territory. Its international student numbers are growing with around 5,400 in 2019, and a number of offshore programmes are offered by the university, primarily in the Asia-Pacific region.

View of the courtyard of the Humanities building of the Flinders University.

Flinders University offers more than 160 undergraduate and postgraduate courses, as well as higher degree research supervision across all disciplines. Topics and programs rely on extensive industry engagement and new technologies to deliver flexible learning and an education aligned with workplace needs. 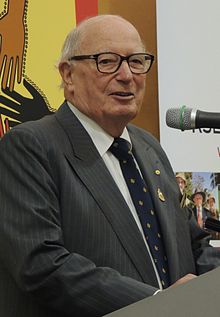 Flinders University has been served by six Chancellors and eight Vice Chancellors since its establishment in 1966. They are:[33]

Flinders University is the only South Australian university with on-campus accommodation in the Adelaide metropolitan area. There are two options:

Empire Times was published by the Students' Association of Flinders University (SAFU) from 1969 to 2006. The founder and first editor of the newspaper was Martin Fabinyi, and the newspaper was originally printed in the back of his house by fellow student Rod Boswell. Empire Times had a history of controversial humour and anti-establishment discussion. Notable former editors and contributors included Martin Armiger and Greig (HG Nelson) Pickhaver, Steph Key and Kate Ellis. Empire Times ceased publication in 2006 as a result of voluntary student unionism, but resumed in 2013.[47]

Flinders University has many sports teams that compete in social and competitive competitions.

Additionally, Flinders University students have the capacity to go away to annual university games events and compete in a range of sports while representing the University.

Entertainment and the arts