Dutch Australians refers to Australians with full or partial Dutch ancestry. They form one of the largest groups of the Dutch diaspora outside Europe.

The history of the Dutch and Australia began with Captain Willem Janszoon, a Dutch seafarer, who was the first European to land on Australian soil in 1606.[4][5]

The Dutch East Indies Company (VOC) had its headquarters in the Far East in Batavia (modern-day Jakarta) from 1619, but traded from many Asian harbours from 1602. The journey from the Netherlands to the Dutch East Indies would take more than a year by traditional route, but after the discovery of the Roaring Forties by Dutch captain Hendrick Brouwer, who established the so called Brouwer Route in 1611 the voyage would be cut short by months, taking a trajectory along the southern latitudes of the Indian Ocean. By 1617 all VOC ships were ordered to take this route. The navigation technique of that time, known as dead reckoning, caused some ships to travel too far east so they sighted the Australian west coast, and a small number of them were wrecked there. Dirk Hartog made the first European landing of the Australian west coast with a pewter plate in 1616. Known ships wrecked off that include the Batavia, the , the Zuytdorp and the Zeewijk. The wreck of the Batavia on Houtman Abrolhos during her maiden voyage, turned into a bloody mutiny led by Jeronimus Corneliszoon after the survivors had landed on an island and Commander Pelsaert had left to get help. The most famous Dutch seafarer to explore the Australian coasts is Abel Tasman, who was the first to circumvigate the continent in 1642-3. He established that the land was not the gigantic legendary southern continent that included the South Pole and he named it New Holland. Tasmania which Tasman had named Van Diemens Land and the Tasman Sea were eventually named after him. Most of the Australian coastline was first charted by VOC mariners, excluding the east coast and the eastern part of the south coast. The continent would be renamed "Australia" in the 19th century. 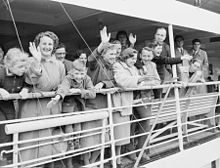 A number of people from the Dutch East Indies (present-day Indonesia) found their way to Australia during World War II and joined Allied forces in the fight against the Japanese. The Dutch East Indies government operated from Australia during the war. Free Dutch Submarines operated out of Fremantle after the invasion of Java. The joint No. 18 and No. 120 RAAF squadrons formed at Canberra, and was a combined Dutch and Australian Squadron. It used B-25 Mitchell bombers, supplied by the Dutch Government before the war. The Netherlands East Indies Forces Intelligence Service (NEFIS) was based in Melbourne during the war.

Post-war settlers in Australia arrived as part of Australia's assisted migration program. Many arrived by sea on the MS Johan van Oldenbarnevelt, while others flew with KLM.