Anglo-Celtic Australians[3] are White Australians whose ancestors originate wholly or partially in the countries of England, Wales, Scotland and Ireland.[4][note 3]

The British Government initiated European settlement of the Australian continent by establishing a penal settlement at Sydney Cove in 1788. Between then and 1852, about 100,000 convicts (mostly tried in England) were transported to eastern Australia. Scotland and Wales contributed relatively few convicts. The convicts were augmented by free settlers, including large numbers who arrived during the gold-rush in the 1850s. As late as 1861, people born in England, Wales, Scotland and Ireland outnumbered even the Australia-born population. The number of settlers in Australia who were born in the United Kingdom (UK) peaked at 825,000 in 1891, from which point the proportion of British among all immigrants to Australia steadily declined.[clarification needed]

From the beginning of the colonial era until the mid-20th century, the vast majority of settlers to Australia were from Britain and Ireland, with the English being the dominant group, followed by the Irish and Scottish. Among the leading ancestries, increases in Australian, Irish, and German ancestries and decreases in English, Scottish, and Welsh ancestries appear to reflect such shifts in perception or reporting. These reporting shifts at least partly resulted from changes in the design of the census question, in particular the introduction of a tick box format in 2001.[5] 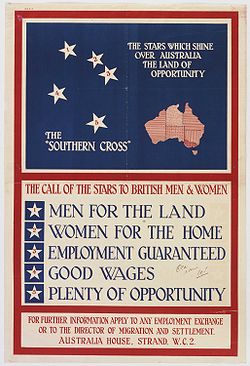 While those born in England have formed the largest component of the British immigrant population, Australia has also received significant numbers of immigrants from Ireland, Scotland, and Wales. Up until the First World War the Irish were, in their own right, the second largest immigrant population.[7]

The most dramatic increase in the British immigrant population occurred between 1961 and 1971. The number of British-born people living in Australia exceeded one million at the 1971 Census and has remained above one million to this day. The United Kingdom-born population in Australia reached a peak of 1,107,119 in 1991.

Figures below show the proportion of British and Irish immigration per official census.

Notes: From 1954 onwards people from "Northern Ireland" and "Ulster" were recorded separately from the people of "Ireland".[25] The 1966 census (is Republic of Ireland & Ireland (undefined).

A 1996 study of the ethnic origins of the Australian people shows:[35]

Tasmania could have the nation's highest proportion of citizens of Anglo-Celtic origin, possibly as high as 85 percent. On the evidence of statistics of ethnic derivation Tasmania could also be considered more British than New Zealand (where the Anglo-Celtic majority has fallen below 75 percent).[36]

The number of people reporting "Australian" ancestry has increased with a large amount of these people having Anglo-Celtic or British origins with ancestors being in Australia for generations. In 2001 the figure almost doubled the 3.4 million (21.8% of the population) who gave Australian as their ancestry in the 1986 Census.[41]

Some have argued that the term is entirely a product of multiculturalism that ignores the history of sectarianism in Australia. For example, historian John Hirst wrote in 1994: "Mainstream Australian society was reduced to an ethnic group and given an ethnic name: Anglo-Celt."[42]

In the eyes of multiculturalists, Australian society of the 1940s, 150 years after first settlement, is adequately described as Anglo-Celtic. At least this acknowledges that the people of Australia were Irish and Scots as well as English, but it has nothing more substantial than a hyphen joining them. In fact a distinct new culture had been formed. English, Scots and Irish had formed a common identity – first of all British and then gradually Australian as well. In the 1930s the historian W.K. Hancock could aptly describe them as Independent Australian Britons.[43]

The Australian journalist Siobhán McHugh has argued that the term "Anglo-Celtic" is "an insidious distortion of our past and a galling denial of the struggle by an earlier minority group", Irish Australians, "against oppression and demonisation... In what we now cosily term "Anglo-Celtic" Australia, a virtual social apartheid existed at times between [Irish] Catholics and [British] Protestants", which did not end until the 1960s.

The term was also criticised by the historian Patrick O'Farrell as "a grossly misleading, false, and patronising convenience, one crassly present-oriented. Its use removes from consciousness and recognition a major conflict fundamental to any comprehension not only of Australian history but of our present core culture."[44]

Streams of migration from the United Kingdom and the Republic of Ireland to Australia played a key role in Australia's cultural development, despite the last substantial scheme for preferential migration from Britain to Australia ending in 1972. There is a long history of cultural exchange between the countries and Australians often use Britain as a stepping-stone to international success. In 1967, British migrants in Australia formed an association to represent their special interests: the United Kingdom Settlers' Association, which subsequently became the British Australian Community.

Also included in the speech: 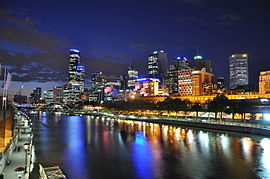 Melbourne – named in honour of William Lamb, 2nd Viscount Melbourne and thus indirectly takes its name from the village of Melbourne, England.

There are many places in Australia named after people and places in the United Kingdom as a result of the many British settlers and explorers; in addition, some places were named after the British royal family.[citation needed]

New South Wales – Cook first named the land "New Wales", named after Wales. However, in the copy held by the Admiralty, he "revised the wording" to "New South Wales".[46]

Queensland – The state was named in honour of Queen Victoria,[47][better source needed] who on 6 June 1859 signed Letters Patent separating the colony from New South Wales.[citation needed]

Victoria – like Queensland, was named after Queen Victoria, who had been on the British throne for 14 years when the colony was established in 1851.[citation needed]