For the company building the Hunter class frigates for the Royal Australian Navy, see ASC Shipbuilding.

ASC Pty Ltd, formerly the Australian Submarine Corporation, is an Australian government business enterprise involved with Australian naval shipbuilding, headquartered in Osborne, South Australia. It is notable for the construction and maintenance of the Collins-class submarine fleet operated by the Royal Australian Navy (RAN) and the construction of three Hobart-class destroyers for the RAN with the first delivered in mid-2017. 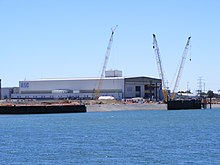 The ASC construction facility on the Port River 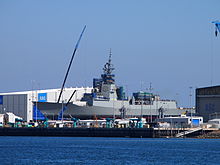 HMAS Hobart under construction by ASC at Osborne

The Australian Submarine Corporation was formed when Kockums (designer of the Collins-class submarine) became part of a joint venture with the Australian branch of Chicago Bridge & Iron, Wormald International, and the Australian Industry Development Corporation to construct the six vessels.[8]

The ASC construction facility was established on previously undeveloped land on the bank of the Port River, at Osborne, South Australia.[9] Work on the site began on 29 June 1987, and it was opened in November 1989.[9][10] South Australia had been selected as the site of the construction facility based on the proposed location of the facility and promises by the State Government to help minimise any problems caused by workers unions.[11]

By the end of 1990, Chicago Bridge & Iron and Wormald International had both sold their shares in ASC.[12] The shares were bought up by Kockums and the Australian Industry Development Corporation, with some of Kockums' shares then sold to James Hardie Industries to maintain an Australian majority ownership of the company.[12] On 5 April 2000, the shares in ASC held by Kockums were bought out and the company was nationalised, despite a trend by the Howard Government towards privatisation of government-owned companies.[13] In 1991 the company had brought the insolvent Carrington Slipways in New South Wales to expand operations. [14]

The company’s name was changed from the Australian Submarine Corporation Pty Ltd to ASC Pty Ltd on 1 October 2004 in order to position it as a supplier of naval combat vessels in addition to being a specialist submarine supplier and maintainer.[15] The name ASC was specifically selected to recognise the company’s “heritage and achievements.”[16]

In October 2016, the Federal Government confirmed that ASC would be dissolved into three companies focused on different elements of current ASC works. One would be dedicated to the Air Warfare Destroyers, one to continued submarine sustainment and development and one to infrastructure development. Dissolution is expected to be complete by 2017.[17][18]

In December 2018, ASC Shipbuilding was structurally separated from ASC Pty Ltd, and transferred to BAE Systems Australia for the duration of the contract to build Hunter class frigates.[19]

In 2005, the company was selected by the Australian Government, ahead of two other bidders, as the preferred shipbuilder for three new AEGIS-based Australian air warfare destroyers (AWD) under the Sea 4000 Project. The AWDs are scheduled to begin service in 2013.[25]

ASC also has contracts for production of Keka-class coastal patrol boats, produced in Hong Kong for use of Hong Kong maritime police, and the Series T.81 produced in Thailand for the use of the Royal Thai Navy.[26]

In February 2014, the National Commission of Audit recommended in its Phase One Report that the Commonwealth sell its interest in ASC.[1]