Football Park, formerly known commercially as AAMI Stadium, was an Australian rules football stadium located in West Lakes, a western suburb of Adelaide, the state capital of South Australia, Australia. It was built in 1973 by the South Australian National Football League (SANFL) and opened in 1974. Until the end of the 2013 AFL season, it served as the home ground of the Adelaide Football Club and the Port Adelaide Football Club. It also hosted all SANFL finals from 1974 to 2013. Prior to its demolition that was completed in March 2019, it had a seating capacity of 51,240. The venue is now a training oval and administrative base for the Adelaide Football Club.

Ground was broken for Football Park in 1971, giving the SANFL its own venue after years of playing out of the Adelaide Oval, which was controlled by the South Australian Cricket Association (SACA). Due to ongoing conflicts with the SACA, the SANFL had wanted to leave Adelaide Oval and move into their own home stadium for a number of years, finally settling on the undeveloped swampland at West Lakes in 1970 (the same year as the similarly designed, but larger VFL Park opened in Melbourne).

Intended to have a capacity of around 80,000, Football Park was originally standing room only in the outer (along with the usual crush barriers) with bench seating in the main grandstand and ended up with a capacity of approximately 62,000.[citation needed] Bench seating was gradually added to the stadium's bowl section, and the concourse roof was finished in 1982, by which time the grounds capacity had settled to around 55,000.[citation needed] The new roof gave the outer of the ground a limited number of under cover seats, as well as opening up more space for advertising boards. Television screens showing the games in progress at the ground are also in place under the concourse roof, as well as in the members area.

After long-term negotiations with the State Government and the local council, as well as local residents, the SANFL started building the ground's four light towers in late 1983. These were finished by early 1984, with all night games in Adelaide moving from the suburban grounds (Norwood Oval and Thebarton Oval) to league headquarters for the next 16 years. Following the Adelaide Crows joining the AFL in 1991, and being joined by Port Adelaide in 1997, new corporate "superboxes" were built on top of the southern concourse, stretching from the scoreboard around to the members grandstand. The following year (1998) the stadium got its first video superscreen, although the old scoreboard located above the tunnel in the south-east corner remained in place as the main scoreboard.

After years of speculation, Football Park's members grandstand was extended in 2001 with the opening of the new Northern Stand, opening up 7,000 new seats. The new grandstand was fitted with individual plastic seats, and the rest of the stadium was finally brought into line with this in 2004, seeing an end to the unpopular aluminum bench seating, and dropping capacity to 51,240.

In addition to football, Football Park has also hosted cricket matches, including the Kerry Packer-run World Series Cricket competition of the late 1970s when the upstart competition was shut out of major grounds such as the Adelaide Oval. The stadium has also hosted International rules football games between Australia and Ireland, as well as being used for rock concerts. Football Park also hosted a National Soccer League game during the early-mid 1990s.

The record football crowd at Football Park was 66,897 when Sturt defeated Port Adelaide in the 1976 SANFL Grand Final, though police believe the attendance figure was closer to 80,000.[3] To avoid a crush, spectators were allowed on the field between the boundary line and the fence, and thousands were turned away by police as the house full signs went up.

Adelaide and Port Adelaide played their last home games at Football Park in 2013, with both clubs moving to the Adelaide Oval in 2014. The record Showdown attendance at Football Park was recorded at Showdown XIX on 10 September 2005 when 50,521 saw the Crows defeat the Power by 83 points in the 2005 First Semi Final. A pre-season match was played at the ground between the two sides in March 2015, in what was the last official event to be held at the ground.[4]

Adelaide still use the playing surface as its primary training round, and have their administrative facilities based next to the oval. 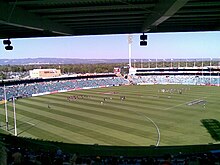 Inside the stadium; view from Northern Grandstand

After it was built, Football Park underwent several additions including:

Proposed upgrades to the stadium were abandoned following confirmation that both Adelaide and Port Adelaide would move matches to the newly redeveloped Adelaide Oval, which has a capacity of 53,583 and is located very close to the city. Adelaide continue to use the oval as their headquarters, and have their own clubrooms and state-of-the-art training facilities on the eastern side of the ground, a similar arrangement to what fellow AFL club Hawthorn have with VFL Park in Melbourne.

The SANFL Grand Final was moved back to its original home at the Adelaide Oval from 2014. The SANFL announced a long-term development plan for the precinct in November 2014 with property developers Commercial & General for A$71 million.[12] It was announced that the land will be redeveloped for 1,600 new houses, a library, retail area and a five-storey, 120-bed aged care facility.[13] Following the announcement, most of the seating at the ground was removed (in 2016 and 2017) and given to local football clubs, before demolition work on the grandstands began in June 2018.[14] The demolition of the grandstands was completed in March 2019.[15]

The playing surface covered approximately 2 hectares, with the average distance between the boundary line and fence being six metres. The ground dimensions from fence to fence were 177 m × 145 m (194 yd × 159 yd) and the playing area inside the boundary lines was 165 m × 135 m (180 yd × 148 yd) and the goals ran north to south. There was a drop of approximately 1.5 metres from the centre of the ground to the fence to help with drainage, leaving the ground with a distinctive hump.